Winnipeg Sun:  Jets will dig deep into character before draft.  There will be a lot of tire kicking between now and the draft in Buffalo.  Of course either option will likely be lights out for Winnipeg. 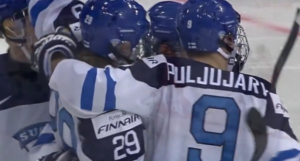 Winnipeg Sun:  Presence of Jets players and prospects make world championships hot topic in Winnipeg.  With Jets fans not necessarily tuning into the Stanley Cup Playoffs they have another tournament with a bit more relevance to folks that follow the Winnipeg Jets.

Sportsnet:  Laine impossible to miss vs. Matthews in worlds exhibition.  I think many Jets fans are still in the “pinch me, am I dreaming phase” with the options that the team has with the move to second overall.

TSN 1290 Winnipeg:  Roundtable.  Guy Flaming of The Pipeline Show discusses the 2016 NHL Draft and who the Winnipeg Jets might select with the number two overall pick.

TSN 1290 Winnipeg:  Roundtable.  Scott Cullen of TSN.ca joins Rick Ralph to discuss his thoughts on the off-season plan for the Winnipeg Jets.

TSN 1290 Winnipeg:  The Big Show.  Play-by-play man Paul Edmonds joined the Big Show for a hockey chat including a look at the NHL playoffs as well as what picking 2nd overall means for the Jets and why Winnipeg is suddenly an attractive destination for players around the league.

TSN 1260 Edmonton:  Sports Night with Dean Millard.  Dennis Beyak, the voice of the Winnipeg Jets joined us to discuss the team picking second in the 2016 NHL Entry Draft.