Note:  The Jets will hold their end of season exit interviews with the media this morning at the MTS Centre.  Coach Maurice and GM Kevin Cheveldayoff will also address the media at some point today.  Keep it locked to illegalcurve.com throughout the day as I will be down at the MTS Centre and once the site is updated we will also notify you via Twitter |Facebook | Instagram.

Note II:  The Moose swept the IceHogs over the weekend to send the fans home with two different but equally satisfying wins.  On Saturday they steamrolled Rockford 5-1 and Sunday they came from behind twice, down 2-0 and 4-2, to secure a 5-4 win.  The team has the day off today.  They will practice Tuesday and Wednesday before departing for the final two games of the season next weekend in Texas.

Note III:  In case you missed it while we were in the midst of conducting Jets players exit interviews, Winnipeg’s 2015 1st round pick Kyle Connor announced via twitter that he had signed with the team.  We should hear more from him tomorrow although he did speak with Hustler and Lawless today (you can listen to interview here).

Winnipeg Free Press:  Jets leave behind a familiar refrain: ‘next year’.  (Paywall).  And one that Jets fans are hopeful will not be repeated again next year.  While the team may be even younger next season there will be some tremendous talent added to the roster that fans hope will translate to a different result.

Winnipeg Free Press:  As contract nears end, Pavelec reflects on disappointing season.  (Paywall).  It is going to be an interesting off season for the Jets netminder.  He will have to be prepared for the challenge of the World Cup in addition to a likely challenge from prospect and current Moose #1 goalie Connor Hellebuyck.

Winnipeg Free Press:  Wheeler says donning the ‘C’ would be an honour.  (Paywall).  It is still very raw for Blake Wheeler just a few days after the team closed the books on the 2015-16 season but it is clear that he is seen by his team mates as a leader in the room and that will likely translate to the C being added to his jersey next season.

CBC:  Jets show no quit despite disappointing season.  A look at some of the themes/topics discussed during the player interviews.

Illegal Curve:  GM Kevin Cheveldayoff.  The Jets GM met with the media for his end of season interview for the 2016 season.

Illegal Curve:  Coach Paul Maurice.  The Jets bench boss met with the media for his final interview for the 2016 season.

Winnipeg Sun:  Head coach Paul Maurice unplugged.  Ken went one on one with the Jets bench boss and asked him these fifteen questions to give fans some insight into the mind of the coach.

Winnipeg Sun: Ken’s Notebook.  With the season ending as well as it did for the Jets centre many fans will begin to wonder what his potential contract may look like.  Ken also touched on Wheeler’s numbers, Kitchton waiting, Poolman/Connor and Around the Glass (Copp, Dano and Lemieux). 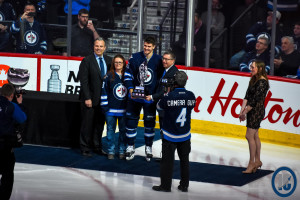 Globalnews.ca:  Moose close out their home schedule with comeback win after presenting year end awards.  Read the recap from Russ which includes video.

Illegal Curve:  End of Year Awards.  A look at the players who won each of the awards and audio from Chase De Leo and Connor Hellebuyck discussing winning.