Note:   The Jets kicked off the final home stand of the season with a bit of a thud against the Senators last night.  About the only positives was the appearance of Len ‘Kroppy’ Kropioski who was feeling well enough to return to the MTS Centre and the hit by Dustin Byfuglien on Winnipegger Mark Stone that had folks talking around the NHL.  The Jets have cancelled practice for today.

Note II:  Don’t look now but Connor Hellebuyck’s hot streak continues as he picked up his fifth consecutive win last night.  The Moose won in Iowa beating the Wild 3-2.  Chase De Leo was returned to the team after the Jets game.  Manitoba will practice this afternoon in Urbandale.

TSN 1290 Winnipeg:  The Rona Roundtable.  Tim Wharnsby discusses what the newest Winnipeg Jet Brandon Tanev can bring to the organization.

TSN 1290 Winnipeg:  The Big Show.  ESPN’s Craig Custance joined the guys for some NHL talk including which teams are most hurt by no-movement clauses and why the Winnipeg Jets and Edmonton Oilers are listed as the least desirable locations by NHL agents plus what the two teams can do to change that reputation.

Winnipeg Free Press:  Two points closer to Matthews.  (Paywall).  Ed wraps up the game including the game deciding mistake, the Buff dozer, Dullsville, streaks extended as well as a video breakdown of the game from Jeff and Ed. 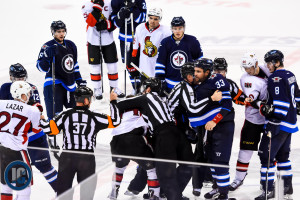 Winnipeg Free Press:  Bring on the extra work, Trouba says.  (Paywall).  If there is one thing that is pretty clear about Jacob Trouba is that he isn’t afraid of playing more in a game.  He clearly wants to be a workhorse that is relied upon by his coach.

Winnipeg Free Press:  Little’s status changes, could return this season.  (Paywall).  Really didn’t think we would get to a place where #18 could be in the lineup before the end of the 2015-16 season.

Winnipeg Free Press:  Jets youth movement appears to be in full swing.  (Paywall).  With the Jets going younger and younger Ed wonders when do the Jets become too young for their own good?

Winnipeg Sun:  Buff hit overshadows loss to Sens.  Following the game the majority of conversation was focused on the hit by big #33.  Although the hit may have been overshadowed by the return of Kroppy who received love whenever he was shown on the Jumbotron.  Ken recaps the game. 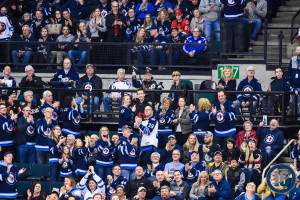 Ottawa Sun:  Senators officially eliminated from playoffs.  They lost despite the win.  Get the recap of the game from a beat writer who covers the Jets opposition.

CBC:  Jets young depth still a question mark.  A warning that it can be dangerous to get overly excited about the prospect of the future.

Globalnews.ca:  Fan favourite “Kroppy” makes emotional comeback at Wednesday’s game.  It was the most poignant moment of the season.

Globalnews.ca:  Demand for Winnipeg Jets tickets down due to disappointing season.  While it may not be a problem this season it will be a concern moving forward as anytime demand for a product decreases it is never a good thing.

Windsor Star:  Like father, like son: Lemieux lifts Spitfires from brink.  With a lot of the focus on #ConnorWatch it is easy to forget that there are other Jets prospects garnering interest from the parent (or farm) club.  Lemieux had quite the night to keep the Spitfires in the playoff picture.