Note:  The Jets had a day off in Philadelphia on Sunday but will hit the ice for a game day skate at the Well Fargo Center this morning.  Puck drops against the Flyers at 6 pm.  Be sure to keep it locked here for the latest Jets news. As soon as illegalcurve.com is updated we will also notify you via Twitter | Facebook | Instagram.

Note II:  The Moose also had a day off yesterday.  They have a re-match tonight at the MTS Centre against the Charlotte Checkers.

Winnipeg Free Press:  Postma not taking anything for granted.  (Paywall).  He has spent years trying to get his shot and it seems like he will finally get this chance to run out the 2015-16 season. 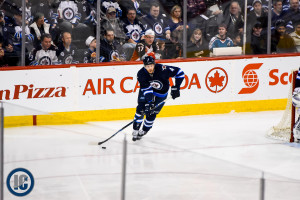 Winnipeg Sun:  Let the Kyle Connor Watch begin.  No doubt about what most fans would like to see from this top Jets prospect.

Illegal Curve:  In case you missed it, Kyle Connor ended his freshman season on a 27 game points streak as his Wolverines season came to an end when they went up against a superior UND team in the Midwest Regional Final.