Note:  The Jets blew a two goal lead in Buffalo yesterday afternoon and failed to achieve a three game win streak for the umpteenth time this season.  The Jets are in Philadelphia but haven’t indicated if they will skate today.  They take on the Flyers tomorrow night at 6 pm.

Note II:  The Moose haven’t fared very well when they do a specialty jersey game.  They are now winless in four tries (Camo – L, Polar bear – L, Throwback – OTL and Autism – L).  The team has cancelled their practice this morning.  They have a re-match against the Checkers tomorrow night at the MTS Centre with a 7 pm puck drop.

Note III:  Kyle Connor extended his points streak to 27 games but his Wolverines season came to an end when they went up against a superior UND team yesterday in the Midwest Regional Final.  Now we begin #ConnorWatch as Jets fans wait to see if he signs with the team or decides to continue playing at the University of Michigan.

Winnipeg Sun:  Jets mathematically eliminated. It was bound to happen and yesterday the end to the playoff dreams offically ended.

Winnipeg Sun:  Myers travelled with team to visit NY surgeon.  He has completed the knee portion of his surgeries and now moves to the hip part of the season ending surgeries.

CBC:  Jets escape Buffalo with a big loss.  What is up is down and what is down is up as Adam focuses on the power of losing instead of winning.

Buffalo News:  Sabres finally finding their way on home ice.  Read about the game from the perspective of a beat writer who covers Buffalo.

Buffalo News:  Myers, Stafford grateful for time with Buffalo Sabres.  They received a nice video tribute from the Sabres and had the opportunity to re-connect with a number of familiar faces for the first time since the trade last season. 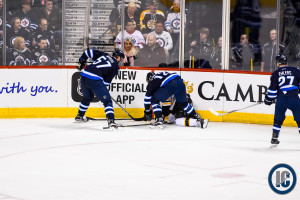 Illegal Curve:  Coach Maurce post-game.  How did he see that game?  Badly played?  On what Ehlers brought with his speed today.  How disappointed is how that they couldn’t clamp down on a 2-0 lead.  Not just the rookies.  How did he think Trouba got through the game? Burmistrov’s turnover.

MLive.com: Michigan hockey ousted by North Dakota, falls short of Frozen Four.  It was a great game but Jets prospect Tucker Poolman and his UND squad were simply too good for high flying Kyle Connor and his Wolverines.  Both picked up assists in the Midwest Region Final.