Note:  The Jets could have won last night five or six to zero but settled for a 2-0 win over the Canucks.  The difference was Vancouver goalie Jacob Markstrom who made 48 of 49 saves.

Note II:  The Moose return to the ice following a day off yesterday.  Manitoba will face off against the Stockton Heat in a re-match of Monday’s game, one the home side won 3-0 courtesy of the strength of a Connor Hellebuyck shutout and Brenden Kitchton pair of goals.

TSN 1290 Winnipeg:  Hustler and Lawless.  Head coach Paul Maurice sits down with the guys for an extended interview about the 2015-16 season. Maurice discusses the development of players like Mark Scheifele and Nikolaj Ehlers, the performance of goaltending and special teams, and why he’s delayed naming a captain.

TSN:  Odds are Matthews heading north to Canada.  No Eric Lindros type situation from the sounds of it which should make the fan bases in Canada quite happy.  Bob also writes about Jets 2015 1st round pick Kyle Connor and what might happen with him. 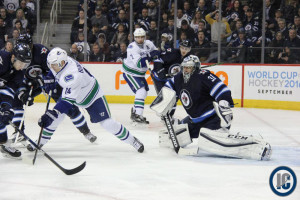 Winnipeg Free Press:  Wheeler leads Jets in points, is first to shoulder blame for woes.  (Paywall).  One thing about big #26 is he sure doesn’t sugar coat things.  He is usually pretty raw/honest with his thoughts and yesterday was no different.

Winnipeg Sun:  Career year means little to Jets`Wheeler.  While it is nice to add points to the final individual totals a player like Wheeler wants to be part of a winning squad.

Vancouver Sun:  Markstrom brilliant, but Canucks shut out again.  The Canucks goalie was the difference in the game being a two goal loss and a five, six or seven goal loss.  He was sensational giving up just one goal and making 48 of 49 saves.  He did everything but score a goal for his team. 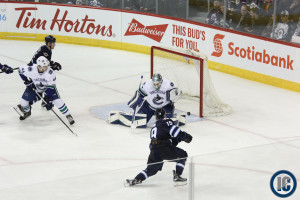 CBC:  Blake Wheeler’s ‘worst year’ has nothing to do with Blake Wheeler.  No question about it.  The big winger is clearly frustrated with the path this season has taken for the team.

Sportsnet:  Is Mark Scheifele ready to be the Jets’ No. 1 centre?  No question that in a trying year Jets fans and the team have to be happy with the emergence of Mark Scheifele as a number one centre.

The Province:  Jets are bad, but fans keep coming – and yes, give some credit to Gary Bettman.  Former Winnipeg based scribe re-connects with the city he spent eight years in covering sports.

Illegal Curve:  Tobias Enstrom to have surgery Thursday; out indefinitely.  In what seems to be a never ending path to the press box the Jets added another member to the list of players watching the game from high above the ice surface.  Full quotes from the coach in this post.

Pressbox Podcast:  Host and analyst Richard Pollock breaks down the Jets play against the Canucks.  To listen click here.

TSN 1290 Winnipeg:  Hustler and Lawless.  Prospect Brendan Lemieux joins the guys to discuss his season with the Windsor Spitfires and Barrie Colts. Lemieux explains how his game became more disciplined over the year, and how he’s learned to become a more rounded player.

Winnipeg Free Press:  Does it make sense to give Scheifele big dollars? (Paywall).  In this episode of “White Noise” sports editor Steve Lyons and reporter Paul Wiecek are at the MTS Centre talking Mark Scheifele and his future with the Jets.  (Jets talks starts at 8:55 mark).