Note:  The Jets will take on the Vancouver Canucks tonight at the MTS Centre.  Pucks drops at 7 pm.   Be sure to keep it locked here for the latest Jets news. As soon as illegalcurve.com is updated we will also notify you via Twitter | Facebook | Instagram.

Note II:  The Moose beat Stockton last night 3-0 as Connor Hellebuyck posted his second straight shutout and Brenden Kitchton put up two goals.  The teams will face off in a re-match tomorrow night at the MTS Centre.

Winnipeg Free Press:  Race to the bottom promises prime pick in talent-rich draft for Jets.  Most Jets fans have their sights firmly set on Buffalo and it has nothing to do with former Jets Evander Kane or Zach Bogosian.  The NHL Entry Draft which will be held in Upstate New York at the end of June and it promises local fans plenty of opportunity for enrichment.

Winnipeg Free Press:  Burmistrov loads up on late-season confidence.  He has always been an earnest player who longs to make a big contribution to this Jets squad. 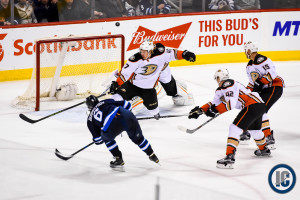 Winnipeg Sun:  Ehlers has an eye on the future and likes what he sees.  The prospect of Ehlers and Matthews on the Jets next season may have some Jets fans wondering what they will have to sacrifice to make that dream come true.

Winnipeg Sun:  Ducky and ‘Fe-fe’ forever connected.  The former and current Jets top picks have all sorts of linkage and continue to have an deep connection.

TSN:  The challenge in making the Jets a perennial playoff club.  Dennis steps out of the broadcast booth and pens this piece on the factors that go into making a team a perennial contender in the NHL and how the Jets have gone about this process.

Vancouver Sun:  Canucks, meet the Jets. And no, that’s not a mirror you’re looking into.  It has been a less than inspiring season for both franchises.

Illegal Curve:  Mathieu Perreault has a concussion and is out indefinitely.  It looked bad the moment it happened on Sunday and coach Maurice doesn’t have a timeline on when we may see #85 again on the ice for the Jets.

Illegal Curve:  Jets Practice Report.  A look at the players not on the ice for skate today at the MTS Centre as well injury updates on Perreault, Ehlers, Armia, Stuart and audio from Nikolaj Ehlers.

TSN 1290 Winnipeg:  Rona Roundtable.  Corey Pronman of ESPN.com discusses Kyle Connor, the Winnipeg Jets group of prospects, and how they stack up against the rest of the NHL.

Illegal Curve:  Coach Maurice scrum.  Injury updates.  What has this team missed with the absence of Ehlers.  Where was his checking (defence) ability in his last game compared to game 1?  Figuring out what Alexander Burmistrov can be.  On Burmistrov and the concept of “confidence”.  Coach’s job to maintain balance.  What has he seen from Postma’s game?  What has he learned about his group this season that he didn’t know before?  Has it been a shocking fall from out of the playoff race?  Shows how difficult it is to win in the NHL?

TSN 1290 Winnipeg:  The Big Show.  Former NHL’er J.P. Vigier joined the guys to talk about the play of Ben Chiarot, Alex Burmistrov and Scott Kosmachuk and why the 22 year old has impressed more than anticipated.

TSN 1290 Winnipeg:  The Big Show.  Dennis Beyak stopped by to talk about Chase De Leo’s development and why Nic Petan’s game has jumped up after his first stint with the big club.