Note:  Following last night’s 4-1 loss in Calgary the Jets return home as they get ready to start a four game homestand.  The team has the day off today before welcoming former team captain Andrew Ladd and his Chicago Blackhawks to the MTS Centre on Friday night.

Note II:  The Moose travel today as they get ready for a pair of road games in Cleveland.  They will face the Monsters at Quicken Loans Arena Friday and Saturday.

Winnipeg Sun:  Three and you’re out.  The always difficult third win in a row will continue to prove elusive as a flat 1st period cost the Jets last night in Calgary.

Winnipeg Sun:  Cheveldayoff happy to have some clarity on expansion draft rules.  Could prove problematic for the Jets just as they should have some nice pieces of the puzzle.

Winnipeg Sun:  Cheveldayoff gives thumbs up.  Plenty of talk from the GM meetings in Florida.

Winnipeg Free Press:  Fans’ opinions may vary, but Ladd was universally respected in locker-room.  No question the type of response he is going to receive when the Hawks come to town on Friday. 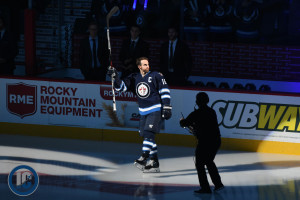 Illegal Curve:  Coach Maurice post-game scrum.  What impact did the disallowed goal have on his group?  What did the Flames do better than the Jets in the 1st?  How did he feel about the effort the last 40?

TSN 1290 Winnipeg:  Hustler and Lawless.  GM Kevin Cheveldayoff joins the guys after the NHL general managers meetings. Cheveldayoff discusses how the prospective expansion draft rules may impact his club, and where the franchise is in its “draft & develop” process.

Globalnews.ca:  Austen Brassard shows his musical talents.  Russ shows you another side of the Moose forward.