Note:  Jets returned home following 2-1 shootout win over the Oilers.  Wheeler scored in regulation while 26 also got a goal as first shooter followed by Ladd getting what turned out to be the shootout winner in the second round.

Note II:  The Moose fell to the Wolves 3-2 in OT yesterday afternoon.  The score may have been overshadowed by the retro aspect of the game as Manitoba went back to their 1996 uniforms and in-game entertainment, including pixelated jumbotron.  Check our instagram account for pictures and videos from yesterday’s game.  The re-match goes this afternoon at 2 pm.

Winnipeg Free Press:  Wheeler fuels Jets’ win.  (Paywall).  Tim breaks down the win from Edmonton which includes a recap, the return of Pavelec, Wheeler leading the way and Ehlers vs. McDavid. 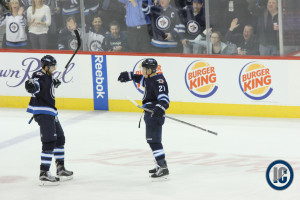 Winnipeg Free Press:  Connor’s no goner, he’ll earn a return.  (Paywall).   Some of the Jets players shared their thoughts on the young rookie goalie, added their thoughts about a final trip to Rexall Place and thoughts from other side on Byfuglien.

Winnipeg Sun:  Jets are kings of the road.  This team certainly knows how to be consistently inconsistent.  Early on this season they were good at home and poor on the road.  Of late they have reversed these two trends.  Good news for Winnipeg is they are road for most of February so they should hope the road wins streak continues.

Sportsnet:  Byfuglien the human wrecking ball.  (video).  In the words of Dustin Byfuglien, it’s easier to knock them down than the catch them. He is not a guy that many want to line up against on any given night. And many of his opponents remember his hits.

Illegal Curve:  Jets prospect Kyle Connor extends point streak to 16.  Add another goal and assist as he continues to dominate the NCAA in his freshman season.  He leads all scorers with 48 points including 22 goals in 27 games.

Illegal Curve:  Jets outdoor game to be played in late October.  While we don’t have official word yet from the NHL it is under good authority that the game will be in the fairly mild (by our Manitoba standards) October.  Appears that the Oilers are the team expected to face the Jets at IG Field.

TSN:  Expect Jets to make final push to sign Ladd.  From what Gary has to say it appears neither side is ready to say au revoir to this relationship.

St. Louis Blues official site:  Steen’s special bond.  (video).  Yesterday was retro day at the MTS Centre and while the Jets 1.0 never played in downtown Winnipeg there were plenty of good memories from back in the day.  Watch this video which brings back more memories.

Jets 2 Oilers 1 in SO post-game audio:

Globalnews:  Moose waste two goal lead in overtime loss to Wolves.  Coach McCambridge and the rest of the guys who spoke following the game felt their 2nd period let them down and allowed the Wolves to get into the game.