Note:  Jets fans are feeling blue from the less than memorable end to the six game home stand (1-5-0) but Winnipeg is in Colorado tonight so there will be no feeling bad for themselves today.

Note II:  The Moose have an afternoon contest today at the MTS Centre as they seek revenge for a thrashing they took Thursday night against the Toronto Marlies.  Puck drops at 2 pm.

Note III:  Tune in at 9 am to listen to three hours of NHL and Jets hockey talk on the Illegal Curve Hockey Show. The guys will review the Jets/Hurricanes game, look ahead to the Jets/Avalanche game and plenty of NHL talk.  Listen here.

TSN:  All eyes on Byfuglien.  Conventional wisdom seems to be that once Byfuglien situation gets dealt with then the rest will fall into place.

Winnipeg Free Press:  What sparked the Jets against Carolina? A players-only meeting.  (Paywall).  Clearly the fans aren’t the only ones who are fed up. 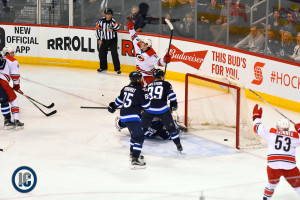 Winnipeg Sun:  Auston in city limits?  Some were talking playoffs but the reality is much more likely a top draft pick.  There has been plenty of tank talk for quite some time as some dream of what it would mean to have a top pick in the fold.

Winnipeg Sun:  Get ready for trade talk to heat up, Jets fans.  Plenty of uncertainty remains as that trade deadline gets closer and closer.

CBC:  Jets, Moose and the common denominator.  The big question for Adam is who is responsible for the current state of the franchises?

Podcast:  Host and Analyst Richard Pollock breaks down the Jets play against the Hurricanes this evening.  Clickhere.

Jets on a Deadline: Game recaps, post-game audio and the NHL.com 3 Stars of the night.  Click here.

USCHO:  Michigan duo of Motte, Connor garner monthly HCA honors.  If the above Jets news makes you sad as a fan the continued success of the Jets 2015 1st round pick can only make you happy.  He also picked up an assist last night in a 3-2 Wolverines loss to the rival Spartans which gives him 43 points in 24 games (tied for 1st in the entire NCAA and he’s played three less games then his co-leader).