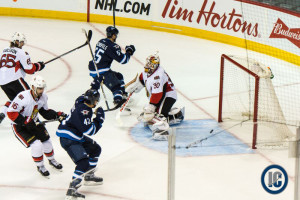 Winnipeg Free Press: Jets go ka-boom in third period. (Paywall).  It was like a switch went off in the 3rd period finally with this Jets team after they had a rather lackluster preseason to date.

Winnipeg Free Press:  Harrison holding on, Raffl trying to fly. (Paywall).  We are getting closer and closer to the end of training camp and the bubble players are doing what they can to stand out and get noticed by coach Paul Maurice.

Winnipeg Sun:  Postma hoping to end run of bad luck.  His 100th NHL game last season in Tampa was arguably his best and it was also his last for the 2015 season.   He returned to the Jets lineup this preseason with a clear goal but also with a number of defencemen ahead of him on the Jets depth chart.

Ottawa Citizen:  Senators remain work in progress after squandering lead in pre-season loss to Jets.  Read about the game from an Ottawa Senators beat writer.

Ottawa Sun:  Senators’ loss shows work still to be done.  While the team played a solid 40 minutes on Tuesday, they collapsed in the 3rd.