Note:  It is a rather unusual feeling knowing that today is the last day of the regular season.  The previous three years we would be preparing for the Jets game day as per usual and then preparing for the exit interviews in the coming days as the players departed Winnipeg for their summer residences.  Instead we will provide all the pre and post game coverage and then flip into Stanley Cup Playoff mode featuring your Winnipeg Jets on Sunday.  So be sure you keep it locked on site for the latest coverage of the Jets.  Be sure to follow us on our various social media platforms including our twitter @illegalcurve, Facebook and Instagram accounts.

Note II:  Reminder that today’s Illegal Curve Hockey Show on TSN 1290 Winnipeg starts at 8 am and goes until 11 am as a result of the 2 pm start time for the Jets and Flames.   The guys will discuss the Jets last road trip, preview the Jets/Flames game, discuss the first post season for the Jets 2.0 and take a look around the NHL.  Guests:  Marty Biron, Terry Simpson and George Johnson.

Winnipeg Free Press:  Rest on the agenda for playoff-bound Jets.  He has to balance wanting to give players who absolutely need some time off with the knowledge that they won’t be playing a game until sometime next week.  Hence the reason why he said towards the end of his scrum today that he is still hammering out his lineup.

Winnipeg Free Press:  A timeline of the Jets’ post-season matchups.  There isn’t a lot of glory in the past playoff success of the Jets franchise unless we are talking WHA and that is practically ancient history to many young Jets fans.

Winnipeg Sun: Architects of playoff-bound Winnipeg Jets, Cheveldayoff and Maurice, are far from satisfied.  Just hitting phase 1 of a multi phase plan to help this team have years of success neither the coach or GM are ready to stop and start patting each other on their backs for what they have achieved to date.

Winnipeg Sun:  Maurice helped Jets build identity.  He tried to deflect the credit to his players but it is hard to deny when you look at the prognostications before the season calling for the Jets to be a cellar dweller and what he was able to get this group of players to accomplish.

Winnipeg Sun: Most valuable player Blake Wheeler drives the bus for Winnipeg Jets.  Ken also unveils his other end of season award winners in this column. 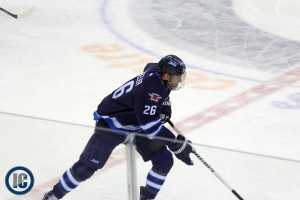 Winnipeg Sun:  Fans line up outside the door to get playoff gear.  It looked like fans were lining up for concert tickets but in reality at Jets stores across town were forking out cash to buy white gear to help usher in the Whiteout 2.0.  While outside and waiting they probably admired the new banners hanging on MTS Centre.

CBC:  Looking for seats in MTS Centre during playoffs, no spring picnic.  It is going to be the hottest ticket in town.

Globe and Mail:  Whiteouts and playoff hockey return to Winnipeg for first time since 1996.  Many are eagerly awaiting the return of the Whiteout based on what it was like back in the mid 90s as well as based on the crowd the MTS Centre boasts at each and every Jets game.

Illegal Curve:  How the Jets did this season against their two potential 1st round opponents?  Fans and experts alike seem to be hoping the team goes to California rather than Missouri to kick start the playoffs.  (Don’t forget to vote in our Poll —-> right side of site).

Illegal Curve:  Jets recall Connor Hellebuyck from St. John’s IceCaps.  He has had a very good rookie season in the AHL and the Jets are having him backup Michael Hutchinson in the afternoon game against the Flames tomorrow.

TSN 1290 Winnipeg:  Hustler & Lawless.  Pierre LeBrun talks about the Winnipeg Jets getting into the playoffs.

TSN 1290 Winnipeg:  Hustler & Lawless.  Kevin Cheveldayoff discusses how the Winnipeg Jets made it into the playoffs.

Illegal Curve:  Coach Maurice scrum.  Some of the things that he has thought about for last 12-15 hours. Update on Mathieu Perreault. Status of Connor Hellebuyck? Any noteworthy calls last night? On the payoff and the impact it can have on the team. On protecting players by not playing them against Calgary. Nice to remove the need to win on Saturday? Does he try to rest players when he can afford to? Is there a concern that the team may now feel like there is a “sense of accomplishment” and that they’ve could get complacent? Does he think back to the letter he received from coach Noel? Growth of the hockey club. Mentality of this team heading into tomorrow’s game against Calgary. Will Enstrom play tomorow? Is Pavelec playing tomorrow? Balance sitting Pavelec with the break before his next game? Will Copp play tomorrow? If Copp does play what does he expect from him?

TSN 1290 Winnipeg:  Rona Roundtable.  General Manager Kevin Cheveldayoff discussed the Jets first playoff appearance since moving to Winnipeg in 2011 and the steps that it took to get there.