Note:  Following a massive victory over the Canucks the Jets will hit the ice at 11:00 AM to practice at MTS Centre today before departing for St. Paul and a date with the Wild tomorrow night.  Be sure to keep it locked to @illegalcurve for the latest Jets news.

Games of significance tonight:  None.

Winnipeg Free Press:  No points for pretty in NHL.  As I’ve been saying all along they don’t care how you put the two points into the standings bank as long as you are putting the points on the board.  Plenty to read in Gary’s article.

Winnipeg Free Press:  Mix more potent with Perreault, Little flying.  Perreault once again showed how important he can be to this roster as he added another three assists, none better than the pass over to Stempniak.

Winnipeg Free Press:  Jets nip Canucks 5-4 in key pre-playoff game.  In this season pretty much nothing makes sense in the NHL so in a game the Jets could have easily lost they picked up a clean two points.  Tim also looks at what’s left, Enstrom’s injury, style points and big start. 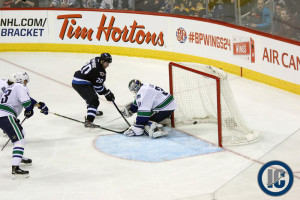 Winnipeg Sun:  Right result, wrong approach.  Paul writes about the bizarre game that the Jets won but could have easily lost.

Vancouver Sun:  Canucks lose game versus Jets, momentum in playoff race.  A look at yesterday’s contest from the perspective of a Canucks beat writer.

The Province:  A rollicking affair tilts Winnipeg’s way.  Botchford is right in saying HNIC made a big mistake not airing that contest between Jets and Canucks.  It was an edge of your seat game which likely caused many Jets fans to lose some hair.

Sportsnet:  Huge win to avoid heartbreaker against Canucks (video).  Blake Wheeler goes one on one with Dan Murphy and talks about how big it was to close out a tight game.

Sportsnet:  Coach’s Corner.  Ron and Don discuss all the news around the NHL, including Dustin Byfuglien’s suspension.

Pressbox Podcast:  Host Drew Mindell and analyst Richard Pollock break down the Jets play against the Canucks this afternoon.  To listen click here.

Jets on a Deadline:  Game recaps, post-game audio, video highlights and the NHL.com 3 Stars of the afternoon.    Click here.