CBC:  IceCaps picked as St. John’s AHL team name.  Much to the chagrin of Tim Hortons, their IcedCaps were not used as the team logo.  Instead the Jets AHL affiliate went with this (see photo below).  What do you think of the new logo? yay or nay.  Let us know in the comments. 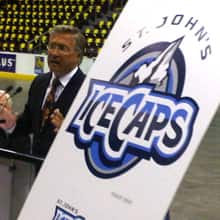 Winnipeg Free Press:  Ex-voice of the Jets hopes to return to the airwaves this fall.  This is a slam dunk.  While this is a new team, new players, new logo there are some things from the Jets 1.0 that are worth retaining and if Keilback can do play-by-play, you need to sign him up.  (btw we will also take Selanne from the Jets 1.0 as well).  If you are unfamiliar with his work here is a sample from a Jets/Leafs game back in 1996.

Winnipeg Free Press:  True, patriot love in all thy Jets tatoo.  People support the team is all sorts of ways, and I guess body art is one “interesting” method that this Jets fans chose to do.

National Post:  New well of spending for Sabres but will they finish ahead of Jets.  I like the Sabres but I’m not a fan of overpaying for talent, especially when the talent isn’t upper tier.  While I’ve believed it previously (see 1990-1995) that the “Jets will be a contender in 3-5 years” via a slow build, I like what Chevy and company are doing with this team.

Winnipeg Sun:  Scheifele to junior camp.   Hopefully folks at the Jr. camp in Edmonton can give us an update on how the Jets 1st round draft pick has developed this summer.

More Jets news after the jump including Zherdev talking to Zhamnov about the Peg’ and from the farm to the front office, a tale of Chevy’s journey to the top of the Jets management.  From ‘Around the NHL’ more on MLSE protecting its turf and the sad story of the Islanders/Coyotes continued struggles.

Winnipeg Sun:  Zherdev far from cool to idea of playing in ‘Peg.  This rumour sure seems to be building up some steam and good news is former Jet Alexei Zhamnov gave the Peg’ a good (I think) plug, according to Zherdev:

“I met with Vityaz GM Alexei Zhamnov a little while ago, he played three years in Winnipeg.  He said it’s very cold and a lot of snow there in the winter, which just makes it an ideal place for hockey.  Great!  Manitoba doesn’t scare me. I wasn’t born in Africa after all.”

Winnipeg Jets Official Site:  From the farm to the front office.  Missed this yesterday, but a good read on the Jets GM.

National Post:  MLSE protecting turf, power of brand.  There is a reason they make the most money in the NHL but they are coming across as heavy handed in this instance.

Toronto Star:  Islanders, Coyotes struggling without a Plan B.  Hard to imagine that these Islanders are related to the ones that used to dominate in the early 80’s.