Note:  The Jets won game two of the three game home stand which concludes Saturday night against the Washington Capitals.  Last night’s victory was the third win in a row for both the team and goalie Ondrej Pavelec who has been very good and was excellent last night.

Note II:  The team will practice at the MTS Centre today.  As always stay tuned to @illegalcurve for up to the minute Jets news.

Winnipeg Free Press:  Jets win first ‘playoff’ game.  It wasn’t a high scoring game and I suspect all the fans inside the MTS Centre didn’t mind that for a second.  Ed also covers a number of other topics in his article including: 1) A new number one goalie..in pencil 2) Missing troops and 3) Extra fun in OT.

Winnipeg Free Press:  Pavelec humble about win over Blues.  While shootouts haven’t been Ondrej Pavelec’s strong suit he stopped two pretty good players in Taresenko and Steen to preserve the win for his team.  He made some exceptional saves during regulation to keep his team within one and has been very good the past three games. 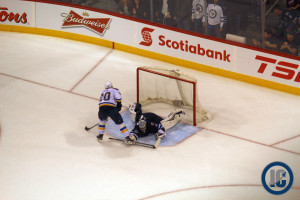 Winnipeg Free Press:  Wheels forces less, wins more.  He has set his mind towards becoming a better all around player instead of a simple focus purely on scoring.  Fans cannot help but admire the team first dedication that a player like Wheeler has adopted this season.

Winnipeg Sun:  Eight is enough for Jets.  Paul covers 1) Who is that masked goalie 2) Which goalie to ride Saturday? 3) 55 is speeding 4) Dare to dream about all players being healthy 5) Wheels still up 6) Reaves public enemy no. 1.

CBC:  Jets near perfect in win over Blues.  Limit mistakes and stay out of the box were the requests made by the bench boss in advance of the game and for the most part that is exactly what the Jets did in their comeback win.

NHL.com:   Ladd, Pavelec lead Jets’ comeback win against Blues.  The term chess match was used to describe last night’s game and it did have a very calculated feel to the game at points.  The Jets probably deserved the W simply by virtue of the number of posts they hit in the game.

St. Louis Post-Dispatch:  Blues settle for a point vs. Jets.  Read about the game from Blues beat writer Jeremy Rutherford.

ESPN:  Just a Thought.  In the column where the ESPN crew discuss NHL news of note two of the six writes mention the Jets.

Sportsnet:  Reaves lays headshot on Halischuk (video).  Does this require any further consideration or was the punishment (2 minute penalty) sufficient?

Illegal Curve:  Jets sign Jan Kostalek to a three year entry level deal.  A few hours prior to game time the Jets announced that they had signed their 2013 4th round draft pick.

Pressbox Podcast:  Host Drew Mindell and analyst Richard Pollock break down the Jets play against the Blues this evening.