Note:  The Jets have the day off today following a big win last night in Nashville.  The team will be back on the ice on Monday as they get ready for a date with the Blues. 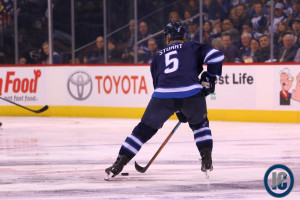 Globe and Mail:  Jets hand Predators sixth straight loss.  The Jets are going to need to take that balance against the Blues as they put this Nashville win in the rear view mirror.

The Tennessean:  Preds’ losing streak grows to six.  Nashville goalie Pekke Rinne had been all but invincible against Winnipeg this year but the Jets finally got to the goalie.

Sportsnet:  Predators’ Bourque knocks heads with Jets goalie (video).  It looked pretty bad for Michael Hutchinson but after lying on the ice for a few moments he was back on his feet with his characteristic grin and Jets fans everywhere exhaled.

Illegal Curve:  Coach Maurice post-game.   Impressive way to start a road trip.  Could he feel that the team was “right” before the game?  Is he still getting answers from his team?  How big was Hutchinson’s play?  20th win for his rookie goalie.  Any theory as to why Hutchinson has been so successful following a game he was pulled previously?  How big a part of the story has Hutchinson been this season?  How did his team keep them so limited with shots?