Note:  The Jets have a final practice at the MTS Centre at 11 am this morning before they head to Music City for a Saturday night date with the Predators. Stay tuned for a Dustin Byfuglien update as the team was off Thursday so today is when media will be advised as to his status.  Be sure to stay tuned to @illegalcurve on twitter to ensure up to the minute breaking Jets news.

Note II:  Lots of bad results if you’re a Jets fan with the Wild winning (and pulling ahead of Winnipeg for the first wild card spot).  As well the Flames won (SO), Kings won (SO),  Canucks lost (SO).

Winnipeg Free Press:  Manitoba Moose 2.0 in the works.  It certainly would be a lot easier to “call up” players that live in Winnipeg as opposed to the ones who live in St. John’s.

Sportsnet:  30 Thoughts.  With all the breaking Jets news I imagine the team would have merited a few more points but Friedman’s column does discuss coach Huddy’s influence on Tyler Myers in point #29.

Illegal Curve:  Coach Maurice announces that Bryan Little is out of the lineup.  This new injury sounds like it could be awhile when the bench boss said rather ominously “it may be longer than this trip”.

Illegal Curve:  Coach Maurice announces that Dustin Byfuglien out 2-4 weeks.  The news that Jets fans were dreading to hear from Paul Maurice.  He is big and #33 has been very durable for the Jets this year as he has played in Winnipeg’s previous 65 games.

Winnipeg Free Press:  A look at the numbers.  Ed examines some numbers of relevance as we creep towards the end of the season.

Winnipeg Free Press:  No word yet from Jets on Byfuglien’s condition.  We will get word today from the team on the status of big #33.  It was a very unusual play that caused him to leave late in the 2nd period.

Winnipeg Sun:  Tlusty’s scoring slump follows him.  That empty net miss was called the turning point in the game by Senators goalie Andrew Hammond post-game.  Of course it is still early in Tlusty’s career with the Jets so perhaps a bit early to hit the panic button.  Paul also writes about the new players fitting in and Trouba’s penalty. 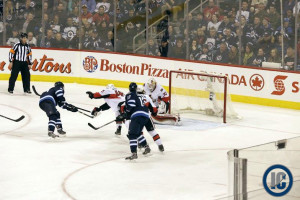 Winnipeg Sun:  Jets walking a fine line with every game meaning so much in playoff push.  There are very few sure things in life and Paul writes how the playoff race is certainly no easy thing to predict.  The team cannot afford to leave a lot of points behind as we get closer and closer to the end of the season.

Winnipeg Sun:  Myers numbers improving with the Jets.  Ted takes a look at Myers numbers and suggests that they have gotten better since his move north.

Sportsnet:  Grading all 30 NHL GMs.  The Jets rank middle of the pack for the moves made so far this season on this list.

Yahoo Sports:  Buzzing the Net.  The scouts’ take on the top 10 NHL-drafted prospects and Jets fans will be very happy to see that they have two notable players on the list.

Metro Winnipeg:  Hutchinson doing nothing but good for the Winnipeg Jets.  Hustler writes about the Jets rookie goalie has had on the team and the importance he will have down the stretch.

Illegal Curve:  Winnipeg Jets and our Canadian Armed Forces post-game meet and greet.  Plenty of pictures of the interactions post-game and coach Maurice helping to keep sports in perspective. 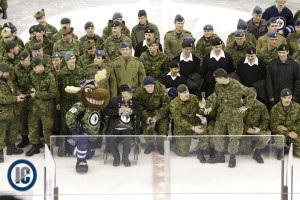 TSN 1290 Winnipeg:  The Big Show.  Shane Hnidy details what Winnipeg needs to do in the absence of their star blueliner and why no one will feel sorry for the club at this point of the season.