Note:  It looked a little dicey when the Jets were down 4-3 with just 4:46 to go in the 3rd period but captain Ladd tied the game just 42 seconds later and they pulled off a shootout win over the Oilers.  Importance of the win is underscored by the fact that the Flames, Canucks, Kings and even the Avalanche won on Monday night.

Yahoo Sports:  Behind that viral photo of Dustin Byuglien flipping off Evander Kane.  Greg Wyshynski from Puck Daddy gets to the bottom of this picture (which I was unaware of until I read the article) and it is a lot more innocuous than many online would have you believe (shocking I know).  The photographer who took the picture explains the truth behind his photograph.

Winnipeg Sun:  Shootout wins are nice but Jets falling behind in important ROW category.  With the first tie breaker being ROW, Ted writes about the importance of the Jets pulling off clean victories.

Winnipeg Sun:  Did Friesen jinx Jets? Injuries piling up for Winnipeg at worst possible time.  Is it time to tar and feather the Sun columnist for his jinxing of the team?  Is this similar to when Remis ruins the shutout by tweeting about it during a game?  Either way the Jets have injuries adding up and we should have a better handle tomorrow after skate as to the extent.

TSN:  Jets taking risk by bringing in Myers.  Yost writes about the analytics surrounding #57 and why the Jets have taken a risk with his acquisition last week.  Does taking him off a 30th place Sabres team and adding him to the Jets system mitigate these numbers?  What say you?

Winnipeg Free Press:  Myers making major impact.  Fans are loving what #57 is bringing to the ice.  Smart move of bench boss Paul Maurice to have Myers and Stafford in the starting lineup to give them their first taste of MTS Centre approval. 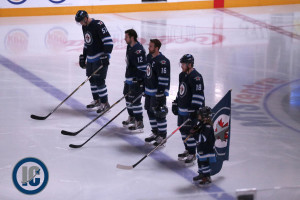 Winnipeg Free Press:  Ugly still worth two points.  It was anything but pretty last night but as someone said to me in the pressbox last night, “they don’t often remember how you won, just that you won” and last night Winnipeg added another two critical points to their standings bank.

Winnipeg Free Press:  New guys recharged.  They have gone from being dead men walking to suddenly in a tight playoff race.

Winnipeg Sun:  Jets spoil Oilers’ night with shootout victory.  There was plenty of consternation as Jets fans saw their team having to scratch and claw their way back into a game they should have been able to win quite easily.

Winnipeg Sun:  Jets lose Perreault, Stafford to injuries.  For a team without a tremendous depth at the forward position seeing #85 and #12 heading off the ice and not returning has to have fans very concerned.  The team can ill afford to be without either of these guys for very long. 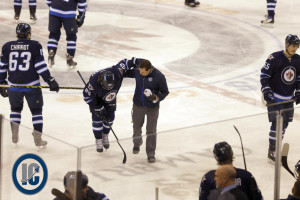 Edmonton Sun:  Oilers force Jets into shootout in improbable tilt.  A headline like that makes me think Winnipeg is finally getting Smythe Division revenge on Edmonton!  Read about the game from an Oilers beat writer.

Edmonton Journal:  Stafford excited to be in playoff chase with Jets.  This was a pre-game article as one of the two newest Jets spoke to the visiting media about his excitement about being in the chase.

Pressbox Podcast:  Host Drew Mindell and analyst Richard Pollock break down the Jets play against the Oilers this evening.