Note:  The Jets return to practice after a day off yesterday.  Should be quite a circus down at the MTS Centre with all the Kane hubbub.

Sportsnet:  Where do Kane and the Jets go from here?  That is the question on everyone’s mind and Elliotte Friedman weighs in with his thoughts.

Sportsnet:  Kane skipped game after incident with teammates.  Just when it seemed like our day was getting back to normal Chris had to go and break this news.

Winnipeg Free Press:  Healthy scratch could be turning point in Kane saga.  Gary broke the news last night on what Kane did to merit being scratched in his hometown.  He writes how the veteran NHL bench boss won’t break a sweat in dealing with this situation.  Will the saga continue or will this be it as we return to a focus on actual hockey?

Winnipeg Sun:  Top trio of Ladd, Little and Wheeler carrying the load.  These guys have pulled more than their fair weight throughout the season and have re-appeared after a few games absence post All-Star break.  If the team wants to be a playoff team they need more than one line to contribute. 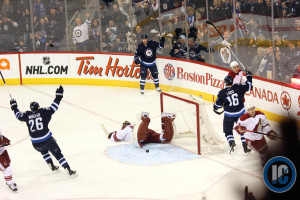 Winnipeg Sun:  Ondrej Pavelec ‘better than he gets credit for’.  Ken better watch his back because a headline like that (which of course Ken doesn’t write) is liable to get some eggs tossed his way.  He starts his column with Pavelec talk, also discusses the disallowed goal, the team adapting to change, bad blood between Jets/Canucks and catching a break.

Winnipeg Sun:  Evander Kane mystery sets off alarm bells with imploding Jets.  Paul wrote this when there was still lots of speculation surrounding the scratching of the young winger.

Metro News:  Nothing ‘natural’ about Kane’s healthy scratch.  Hustler chimes in with this piece on what is happening with Evander Kane and what he thinks the young winger needs to do.

TSN 1290 Winnipeg:  Hustler & Lawless (audio).  Jamie McLennan joined the guys to talk Jets goalies.  He says the challenge in front of Hutchinson right now is in gaining experience in the NHL. McLennan says a platoon system in Winnipeg is a good situation for the Jets to be in. McLennan also agrees with Paul Maurice’s statement that evaluation of a goaltender can’t be done until the team in front of him plays well.

TSN 1290 Winnipeg:  Hustler & Lawless (audio).  Analyst Brian Engblom joined the guys to talk about the coaching tactic behind sitting Evander Kane in Vancouver. Engblom says Tuesday night was likely the shock tactic the Winnipeg Jets need to end its winless streak. Engblom says that Kane and the Jets will likely come back from their recent road trip more motivated and focused.

TSN 1290 Winnipeg:  Hustler & Lawless (audio).  Hockey Insider Darren Dreger joined the guys to discuss Evander Kane being a late scratch in Vancouver. Dreger says injury could have influenced the decision, and that Kane sitting could fuel trade talks ahead of the March trade deadline.

TSN 1290 Winnipeg:  The Warm Up (audio).  Hustler reacts to Evander Kane being announced as a healthy scratch shortly before last night’s Jets, Canucks game in Vancouver.

TSN 1290 Winnipeg:  The Big Show (audio).  Dennis Beyak explains that whatever the reasoning behind the decision, Kane is now left to the judgment of his peers when the team returns to action.