Note:  The Jets return home after earning one point of four on the mini road trip.  They don’t play against until they face the Blackhawks on Friday night at the MTS Centre.

Note II:  Tune into NHL Mid-Week with Illegal Curve on TSN 1290 Winnipeg from 6-8 pm.  The guys will break down the Jets 3-2 OT loss to the Canucks last night, look ahead to the game on Friday against Chicago and take a look around the NHL.

Sportsnet:  30 Thoughts – What’s happening with Kane.  Thoughts 2 and 3 are about Kane.

Winnipeg Free Press:  Jets can’t break losing streak, falling 3-2 to Canucks in OT.  Despite improved offensive production by their top line the Jets couldn’t break away from Vancouver and a timely Lack save allowed the Canucks to tie it up. 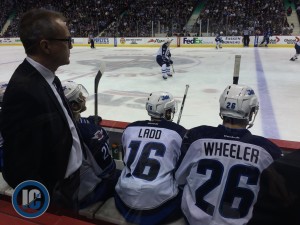 Winnipeg Free Press:  Maurice mum on reason for benching Kane.  Hardly a surprise that he didn’t disclose the reasons.  Coach Maurice early on told the media that what happens in the room stays between him and the players.

Winnipeg Sun:  Jets drop fifth straight, 3-2 in overtime to Canucks.  Prior to the first post All-Star break game the talk around Winnipeg was looking ahead at the teams the Jets could catch but that talk has quickly given way to looking at the teams that are breathing down the neck of the Jets.

Winnipeg Sun:  Mystery of Kane.  Lots of speculation as to what was happening with the Vancouver native throughout the game.  Perhaps we will have more light shed on the situation today.

The Province:  Canucks forced to find their compete level against the big, bad Jets.  Sounds like the Jets are just what the Canucks needed to get their groove back writes Canucks beat writer Ben Kuzma.

Winnipeg Sun:  Looking in rearview for Jets.  Ken looks back at some of the issues that the Jets were facing during training camp and sees if we have answers to these five questions including: 1) How much is a full season under Paul Maurice worth? 2) Will Ondrej Pavelec take the next step in his career? 3)  Just how many goals will Evander Kane score? 4) Has Dustin Byfuglien embraced the move to forward? and 5) Can the Jets get Michael Frolik signed long term?

Globe and Mail:  Can Hutchinson help the Jets rise again?  Sounds like Maurice is going to stick with the rotation down the stretch.  While Jets fans hope the last few games by Hutchinson are just a bump in the road, there is some concern in Jets land with the men between the pipes.

Illegal Curve:  Kane a healthy scratch.  It was the tweet seen around the world as the Jets tweeted out the lines and had #33 up front and #9 was absent from the pre-game warm up.  It got folks on twitter and beyond speculating and as I suspected we got little more from the Jets bench boss following the game.

TSN 1290 Winnipeg:  The Rona Roundtable (audio).  James Mirtle of the Globe & Mail discusses the first place Nashville Predators and the playoff picture heading into the final two months of the regular season.  Says Jets goaltending is the biggest concern.

TSN 1040 Vancouver:  The Bro Jake Show (audio).  TSN hockey insider Bob McKenzie joined the Bro Jake Show yesterday to explain why he thinks the Jets are for real, and along with the Canucks and Flames, will likely be in the mix for the final playoff spots in the Western Conference.

Illegal Curve: Coach Maurice post-game (audio).  On the situation with Evander Kane.  Thoughts on the game.  Was the Kane decision more difficult based on context of team’s situation.  What did he think of the disallowed goal?  On establishing the physical game.  On the play of Pavelec.  On the play of the Jets top line.  Is Mark Scheifele ok?  Efficiency on the PK.  Springboard this game into Friday night?  Does he expect Kane to be back in the lineup on Friday?