Note:  The Jets beat the Jackets 4-0 last night and will spread across North America and beyond today as they get ready to relax during All-Star break.  The team sits with 60 points in 48 games, which is good enough for 5th in the Western Conference following an impressive fifth win in a row over Columbus.

NHL.com:  Fantasy top 30 goalies: Hutchinson evolves into gem.  Hutchinson has seen quite the boost in his fantasy value this season.

TSN:  Strong Jets team could still improve forward depth.  Yost discusses who the Jets could add to the team for a minimal cost as they look to improve their playoff position.

Winnipeg Free Press:  Substance over style.  They have just been consistently producing for this team since puck dropped in game 1.  Ladd, Little and Wheeler have done everything coach Maurice could ask of them this season.

Winnipeg Free Press:  Jets steam past Blue Jackets.  Once again the top line got things started just 68 seconds into the game as Blake Wheeler scored from the seat of his pants.  But then Winnipeg got goals from all three other lines as Kane, Thorburn and Slater all tallied goals to give the Jets a huge win to conclude the final game before the All-Star game. 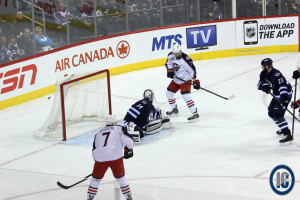 Winnipeg Free Press:  All-star buzz for Jets’ Hutchinson.  The young Jets goalie has caught the attention of the entire league as he continues to show how steady he can be in between the pipes.  Seems that fans got going on twitter both during and following the game as All-Star goalie Sergei Bobrovsky left with a leg injury and they see the rookie netminder as a more than adequate replacement.

Winnipeg Sun:  Jets shred Blue Jackets.  It was billed by the Jets bench boss in advance of puck drop as an incredible challenge to his team to play against a Columbus team that had just one less point than Winnipeg in the last few months.  Despite that the Jets handled the Jackets, thanks in large part to the strong play of Michael Hutchinson in the 1st period, one which saw Columbus carry a significant portion of the play. 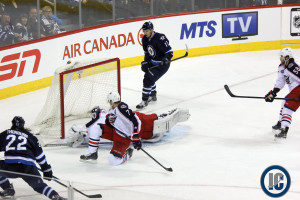 Winnipeg Sun:  Frolik happy with Winnipeg Jets, hopes contract can be worked out soon.  This article has to make the Jets GM (and fans) quite happy and perhaps Frolik’s agent Allan Walsh a bit concerned that he could be losing leverage.

Columbus Dispatch:  Nightmare night.  Things went from bad to worse as the Jackets didn’t just lose the game but they lost All-Star goalie Sergei Bobrovsky.  Read the full recap from the pen of Jackets beat writer.

Sportsnet:  30 Thoughts.  Friedman touches on the Jets in points 5 (Leafs adapting like Jets did under Maurice), 13 (decisions on re-signing Byfuglien & Trouba), 15 (signing Frolik) and 16 (Heritage Classic for next year).

TSN 1290 Winnipeg:  Hustler & Lawless (audio).  Hockey Insider Darren Dreger joins the guys for an early trade deadline discussion. Dreger says, based on how the Winnipeg Jets’ recent success is largely based on hard work, Jets GM Kevin Cheveldayoff is not likely to make many moves leading up to the deadline. Dreger also discusses other possible contract extensions ahead of Cheveldayoff.

TSN 1290 Winnipeg:  The Big Show (audio).  TSN hockey analytics writer Travis Yost joins The Big Show to discuss the value of both Dustin Byfuglien and Michael Frolik, both on and off the ice as well as two players the Jets should target to shore up their forward depth ahead of the trade deadline.

Pressbox Podcast:  Host Drew Mindell and analyst Michael Remis break down the Jets play against the Blue Jackets this evening.