Note:  The Jets return home from a three game road trip out West with three of six points in the bank.  Couple of blown leads in the California back to backs and today they will have the day off to rest and recover in advance of tomorrow’s game against the Panthers at the MTS Centre.  As always stick with @illegalcurve for the latest Jets news.

Winnipeg Free Press:  Ducks take down Jets in shootout.  It was a tough loss for a Jets squad that opened up a second straight lead which they saw evened by the home side.  Unlike Saturday’s result the Jets couldn’t pull off the shootout win.  Regardless of the result Jets fans at the Honda Center got to party from the start of the night to the end.  Ed breaks down the shootout loss in this column. 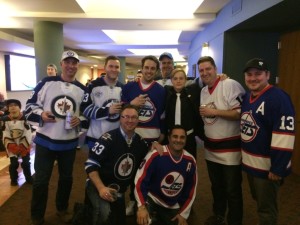 Winnipeg Sun:  Ducks shoot down Jets.  Ted talks about the gritty effort the team put forward in a loss that will leave another sour taste in the team’s mouth.

CBC:  Ducks turn tables, shoot down Jets.  It was the third and final meeting of the regular season between these two teams and while the Ducks did win all three contests they sure provided some entertaining hockey.

Sportsnet:  Byfuglien levels Francois Beachemin into the boards with this bone-shaking hit (video).  I can somewhat understand the need to back up your team mate but the Jets big man laid two huge hits in the game and both times he was forced to defend himself.  If you don’t want to be hit, then pay attention because when Dustin Byfuglien has you in his sights you are going to get hit and hit very, very hard.  Watch this video.

Illegal Curve:  Dustin Byfuglien chosen to represent Winnipeg Jets at 2015 All-Star game.  No player is better suited to represent the Jets.  Fans on our site felt he was the best candidate (38%).  You can hear ‘Big Buffs’ thoughts in this post.

Illegal Curve:  Coach Maurice post-game:  How did he see that one play out?  To get three out of four in a back to back, is that a positive he can take from the road trip?  Was he seeing the effects of last night’s game in tonight’s contest?  Is there anything mental about blowing leads?  Overall thoughts of getting the three players back?  On the saves that Pavelec made. 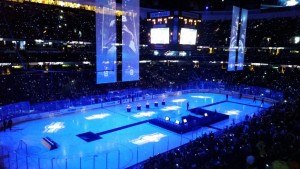 Winnipeg Free Press:  Selanne’s time in Winnipeg deserves tribute here.  Couldn’t agree with Gary more.  I like the idea of an outdoor statue which pays homage to the relationship the city had with the player but doesn’t necessitate hanging a banner to a team that no longer plays here.  Of course the Coyotes hang banners to honour Steen, Hawerchuk within Gila River Arena so I wouldn’t be adverse to that either.

Orange County Register:  Ducks retire Teemu Selanne’s No. 8 with ceremony full of memories.  You cannot help but appreciate what he meant to so many different people.  Truly an inspiring player.

Orange County Register:  Selanne, Ducks greatest star, takes rightful place as first in rafters.  He is a player that exudes class and just as fans throughout the prairies were happy when he won his first Stanley Cup championship they were equally happy to see him become the first Ducks player honoured with his number being raised to the rafters.

Winnipeg Sun:  Selanne celebrated.  Ted writes about the ceremony which meant so much to fans 2500 kms away here in Manitoba.

Winnipeg Free Press:  A perfect salute to a great man, career.  Ed offers up some thoughts from the ceremony.

Sportnet:  Jets skate warm-ups in Selanne jersets (video).  Both teams honoured Teemu Selanne by wearing different jerseys from throughout his career during warm-ups.  The Jets wore the old school white Jets 1.0 jersey with the Selanne name bar and it was quite a spectacle that seemed to resonate with Jets fans young and old.