A year to the day since the Jets second coach assumed responsibilities.

On January 12th, 2014 the Jets let go the first coach for this franchise Claude Noel and at the same time announced that veteran head coach Paul Maurice would be assuming responsibilities for the remainder of the 2013/14 season.  He had been working as an analyst on TSN following a one year coaching stint in the KHL with Metallurg Magnitogorsk. 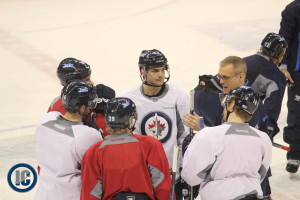 The Jets new bench boss guided Winnipeg to a 18-12-5 for the remainder of the season although the team failed to overcome the deficit they had put themselves in the first part of the year and they didn’t qualify for the playoffs.

Coach Maurice wouldn’t commit to the media his long term goals during the course of the season, despite repeated questions about same for pretty much his entire time behind the bench in 2013/14.  On April 16th, 2014 GM Kevin Cheveldayoff announced that they had signed Paul Mauirce to a four year deal.  On that same day the press could finally chat with him about his signing long term with Winnipeg. 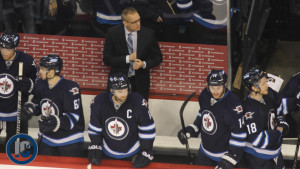 Under the new coach we have learned terms like “gap” and “compete” and he certainly seems to have this team buying into his message.  The expectations by the pundits were low for his Jets team for the 2014/15 season but somehow, despite all the injuries to critical players, the coach currently has the Jets in a playoff spot (5th in the Western Conference) with a 21-14-8 record.

Winnipeg Jets TV caught up with coach Maurice to get his reflections on the past year with the organization.

What are your thoughts on the Jets coach one year later?  Has he brought the joy back to joyland for you?

Winnipeg Jets Morning Papers
How should the city of Winnipeg honour Teemu Selanne?