Illegal Curve:   Game Day Preview: Jets @ Sabres.  The Jets lines have now been posted.  As has the starting goalie for Buffalo.  We have the latest injury news as well as news and notes.

Winnipeg Free Press:  Blaming Byfuglien.  He has been a lightning rod for all that ails the Jets this season.   Of course his somewhat erratic play and his on-ice wanderings are probably not endearing him to fans.

Winnipeg Free Press:  Hoping for even a little.  While coach Noel clearly still believes his center will snap out of this funk (similar to one he had last season) fans are just as concerned as Little with his lack of production. 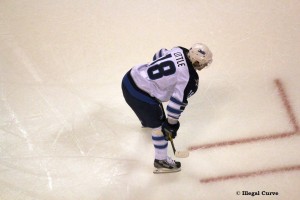 Winnipeg Free Press:   MTS, Shaw stick it to community rinks.  Looks like the community rinks learned the “business is business” expression.  Love how everyone passes the buck in terms of who is responsible for this policy.

Winnipeg Sun:  Noel defends Byfuglien.  There are 1000’s of General Managers/coaches on message boards across the land that have either traded or moved Big Buff to forward, but the only one that matters, namely coach Claude Noel still has confidence in his burly blue liner.

Winnipeg Sun:  Too little from Jets’ Little, Antropov ready.  You feel that he is a lucky bounce or two from breaking this funk.  Good news that Antropov is ready to return.

Winnipeg Sun:  Jets legend will skate in charity game.  I would take Ducky with my first pick.

The Telegram:  IceCaps a well-balanced bunch.  This team has shown that the Moose legacy of hard work and balanced attack has spread to Atlantic Canada.  Note:  Link isn’t working.  When fixed will add.

Buffalo News:   Miller gets Ruffs call.  Looks like Ryan Miller is going to be playing against the Jets tonight.

Winnipeg Free Press:  Miller ‘here to win’.  The one guy in this lineup you don’t want to face with a chip on his shoulder.

Buffalo News:  Sabres’ Miller is ready to play when needed.  Can’t help the Miller’s confidence when coach Ruff calls his tenders 1A and 1B.

Buffalo News:  Jeanneret to take a well-deserved bow.  If you don’t know his unique voice here are the Top 10 Jeanneret calls from TSN:


Buffalo Sabres.com:  Special night for Hawerchuk.  Two thumbs up to whomever picked the night the reborn Jets return to Buffalo to also honour a special player for both the Jets and Sabres.  Say what you will about the Jets history can be located in Phoenix, but this statement suggests the Jets 1.0 legacy resides in the relationship between the city, the fans and those players.