Note:  Game 2 of the four game home stand goes tonight at 7 pm in downtown Winnipeg with the Jets facing a very hot Sabres team.   Buffalo has won four straight games and 10 of their last 13 to launch themselves out of the McDavid/Eichel sweepstakes.  This is the second game in a row that the Jets will be facing a team that played the night before.  As always keep it locked to @illegalcurve for all the latest pre & post game Jets content.

Note II:  Don’t forget that today is the Jets Toy Drive to help famailies in need.  From the Jets:  The Winnipeg Jets Toy Drive begins at MTS Centre doors open at 5:30 pm. Unwrapped gifts and cash donations will be collected upon entry into MTS Centre. All gifts and proceeds will be given to The Salvation Army in time for the holiday season. In 2013, The Salvation Army raised a grand total of $327,593.29 in toy and cash donations. This translated into more than 16,000 toys for children in need in Winnipeg.

Winnipeg Free Press:  Notebook.  We take a peek into Ed and Tim’s notes as they discuss the following:  1) First-aid training essential 2) Spirited energy and 3) Numbers game.

Winnipeg Free Press:  Jets ‘D’ to chip in more on the attack.  Contributions from then entire team is necessary for production as the team looks to add to the defensive foundation they have created.

Winnipeg Free Press:  Facing firing squad rite of passage in NHL.  A discussion of what it is like as an NHL coach to be fired.  Reality is there aren’t many Trotz or Babcock’s, guys who stick with one team for a long time, left these days in the new NHL.

Winnipeg Free Press:  Jets lineup still solidifying ahead of Sabres game.  Plenty of questions remain on how the roster will look tonight.  Coach Maurice said Grant Clitsome will be available but will he be inserted in the lineup?  Be sure to keep it locked to illegalcurve.com for the projected lines following practice at the MTS Centre. 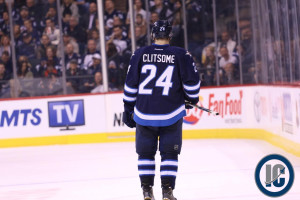 Winnipeg Sun:  Byfuglien will stay on Winnipeg Jets blue-line for the near future.  Do you see this working out for the Jets if they do indeed keep Byfuglien on the blue line?

Winnipeg Sun:  Jets inspire smiles.  There is really no better service that these athletes can perform than bringing some joy to kids who are going through incredibly tough situations and are able to escape for a bit while in the presence of the Jets players.

World Junior A Challenge:  Denmark 4 Russia 2.  Once again Jets prospect Nikolaj Ehlers played the roll of hero leading his team to a victory and helps the Danes win Group B.  He is currently the top scorer in the tournament.

Illegal Curve:  Will Dustin Byfuglien remain a defenceman when team gets healthy?  In his scrum with the media coach Maurice revealed that the defenceman turned forward turned back into a defenceman may be remaining in that position even after the Jets get back to having a healthy D core.

Illegal Curve:  Coach Maurice scrum (audio).  Using Evander Kane up and down the lineup.  What has he seen from Buffalo and what does he expect from them?  Update on Trouba (probable).  Is Byfuglien staying on defence?  Will he be staying on D even when defence is healthy again?  Intense on the ice today, is that due to following an off day?  What is next to be added to the team foundation?  Is Clitsome ready to go?

TSN 1290 Winnipeg:  The Big Show (audio).  Despite suffering their first regulation loss in nine games, Shane Hnidy joins the guys to explain why the Jets continue to be on the right track to becoming a legitimate playoff contending team.

Olean Times Herald:  Sabres rally again, beat Senators in shootout.  Apparently the team didn’t get the memo to keep on losing because all they do these days is win.

Buffalo news:  Confident Foligno firing on all cylinders.  Someone to watch tonight as he has been flying for Buffalo these days.

Sportsnet:  Nolan has Sabres coming together.  He is the type of coach who isn’t afraid to speak his mind, regardless of whether what he has to say is popular or not.  Appears to be working in Buffalo.  Well working if you’re the coach but not so much for those who dreamed of seeing McDavid or Eichel on the back of a Sabres jersey one day.

Will Dustin Byfuglien remain a defenceman when team gets healthy?
Game 32: Jets vs. Sabres projected lines