Will Dustin Byfuglien remain a defenceman when team gets healthy?

Should Byfuglien return to forward or stay on defence?

We all know that the Minnesota native loves to play defence.  He has told the media this on numerous occasion both last year and this season. 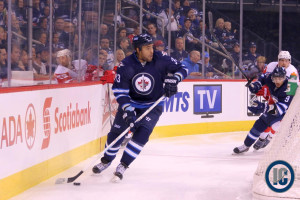 When coach Maurice announced on December 4th that Zach Bogosian, Tobias Enstrom and Grant Clitsome would miss some significant time due to injury he told the media that due to necessity he would be moving the big man back to defence.

Since his move to the back end the Jets have gone 2-1-2 and he has chipped in with two goals and three assists.  He’s averaging 4.4 shots per game and playing approximately 27 minutes per game.  Former NHL defenceman turned NHL analyst Shane Hndiy was on The Big Show on TSN 1290 (audio) back on December 8th to discuss why he felt Byfuglien would thrive under coach Maurice in this role.

In today’s scrum with the media (audio) when asked what might happen when the Jets d-core gets healthy the Jets bench boss said “If we are a better team with him on the blue line he will stay on the blue line”.

So it appears that Dustin Byfuglien, if he can continue to adapt to coach Maurice’s style of defence, may remain in his desired position once the team is healthy.

What say you?  Do you like seeing #33 on the blue line or would you prefer to see him in front of the net?  Perhaps you’d prefer a hybrid!  As always readers are welcome to share their thoughts.