Note:  The Jets return to practice today at the MTS Centre at 11 am as they get ready to face a suddenly hot Buffalo Sabres team (7-3-0 in last 10) on Tuesday night.

Winnipeg Free Press:  Jets will pay for penalties.  The Jets still have a top 10 penalty kill but many of these needless penalties are hurting the team.  In the loss to Colorado coach Maurice reference the penalties, despite the Avs not scoring as a potential turning point in the game as they took away the Jets momentum and forced them into a defensive mode.

Winnipeg Free Press:  ‘It must be a penalty because it’s Winnipeg’ is coach’s lament.  There is no question about it that this team takes too many penalties.  Especially in the offensive zone.  I suspect if they were taken in the course of defending the coach wouldn’t have as big an issue as he does with the penalties.

Winnipeg Sun:  Michael Frolik adjusts to any and all circumstances.  He has been able to adapt to whatever situation he has been thrown into by his coach and he is certainly a player coaches love to have on their team. 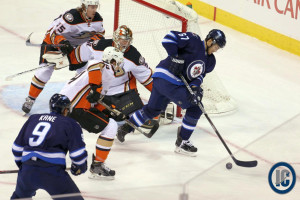 Winnipeg Sun:  Jets proactive to make sure mumps don’t land anyone in sick bay.  Sounds like the Jets have taken measures to ensure that they are watching out for the epidemic that has been impacting teams across the league.  Ken also writes about the third goal against the Jets on Saturday and whether it was a back-breaker as well as Kane’s quiet return.

CBS Sports:  Is this the season the Jets end their playoff drought? It’s up to the goalies.  Will be interesting to see who gets the start against the Sabres tomorrow night.

Illegal Curve:  Jets on a Deadline – Ducks 4 Jets 1:  In case you missed anything from the loss to the Ducks on Saturday here are the game recaps, post-game audio, video highlights and the NHL.com 3 Stars of the night.

Star Phoenix:  Nogier on the move.  The shakeup in Saskatoon continues as the Jets 4th round (101st overall) selection in 2014 was dealt to Red Deer.

The Oregonian:  Five things you need to know about the Portland Winterhawks game against the Tri-City Americans.  Point number four refers to 2014 4th round pick (99th overall) Chase De Leo and how he added an assist in the win to extend his point streak to 12 games.

World Junior A Challenge:  Denmark 3 Canada West 2.  Nikolaj Ehlers was the star in the opening game win for Denmark scoring the game winning goal with Denmark on the power play with three minutes left in the 3rd period.

Illegal Curve:  2014 1st round pick Nikolaj Ehlers on TSN 1260 Edmonton.  On Saturday the Jets prospect was on The Pipeline Show and spoke about quite a bit.  Interesting comment about paying attention to the Jets systems from afar.

Yahoo Sports:  For Team Canada holdovers such as Nic Petan and Chris Bigras, it’s a different dynamic.  Sounds like the brass are impressed with the development of the Jets prospect.

Prince Albert Daily Herald:  Morrissey thanks Prince Albert for four ‘amazing’ years.  Classy move by the prospect to thank everyone who has supported him the past four years.