Winnipeg Free Press:  Sometimes, stuff happens: Hutchinson.  There really is no margin for error when you play a team with the talent of the Anaheim Ducks which the young Jets goalie learned last night.

Winnipeg Sun:  Ducks ground Jets.  Despite playing their second game in less than 24 hours it is easy to see why this team is in first place in the NHL.  Crazy to think of that talent and they were sans Corey Perry and Francois Beauchemin.  One effect of playing the same team within six days is plenty of bad blood resulting in post-whistle festivities.. 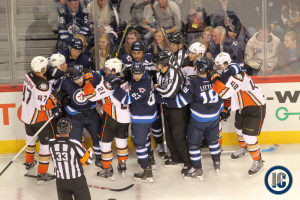 Winnipeg Sun:  Hutchinson shakes off costly blunder.  There weren’t any excuses coming from the rookie tender following the game when he faced the press and answered questions for quite some time about last night’s performance.

CBC:  Jets take note of Ducks’ prowess.  Following the game Blake Wheeler spoke about giving Anaheim ‘too much respect’.  Jeff talks about this and more in his article.

Orange County Register:  Ducks make it 7 straight victories.  Before you get too upset with the Jets for last night’s loss it should be offset by the fact that this is just an unbelievable Ducks team who are firing on all cylinders.

Illegal Curve:  2014 1st round pick Nikolaj Ehlers on TSN 1260 Edmonton (audio).   The Jets top pick last summer was on The Pipeline Show with Guy Flaming and Dean Millard and while the chat spanned across a number of topics the part Jets fans will be interested in was how the prospect is paying attention to the play of Winnipeg.

Pressbox Podcast:  Host Michael Remis and analyst Richard Pollock break down the Jets play against the Ducks this afternoon.