Note:  In an unusual twist to the schedule the Jets face off against the Ducks less than a week after facing Anaheim at the MTS Centre last Sunday.  It was a spirited and heavily penalized affair which made for an unusually exciting Sunday afternoon.  Evander Kane was hit with a two game suspension after he took a checking from behind major and game misconduct on the Ducks Clayton Stoner and coincidentally he returns to action tonight against these very same Ducks.  As always keep it locked to @illegalcurve for all the latest pre & post game Jets content.

Note II:  The Illegal Curve Hockey Show will be on TSN 1290 Winnipeg returning to our usual noon to 3 pm time slot. Join Drew, Richard and Ezra as they preview the Jets-Ducks game and talk about all the latest NHL news.  In the “Saturday Spotlight” former Winnipeg Jets 1.0 coach and current Regina Pats head coach/GM John Paddock will be featured.  Tune in here.

Note III:  Join Dean Millard and Guy Flaming on TSN 1260 for The Pipeline Show as they will speak with 2014 1st round Jets pick Nikolaj Ehlers in Segment 3 of their show today which will air around 11:40 am.  Tune in here.

Winnipeg Free Press:  Gaining altitude.  Ed writes about the Jets being in a playoff hunt not the Connor McDavid hunt.  Plenty to read in these eight tidbits.

Winnipeg Free Press:  Hutchinson deserves more.  Gary makes the case for giving the Jets back-up more chances to start.  Of course quality of competition should be factored in as well when looking at the overall picture but it is hard to argue against the play of Hutchinson.

Winnipeg Sun:  Scheifele surging.  He certainly put on quite the performance against the Avalanche on Thursday.  One which Jets fans will hope to see repeated on a fairly regular basis. 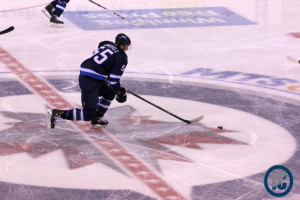 TSN 1290 Winnipeg:  Jets creating a buzz with fan base with solid play.  Plenty to read from Dennis as he talks about the rising excitement level among fans of the Winnipeg Jets.

CBC:  Is Dale Hawerchuk destined to be the next great NHL coach?  While nothing specific about the Jets, aside from mention of the speculation that was going around about him as a candidate for head coach here a few years back, a good read and one fans in Winnipeg will enjoy about the Jets 1.0 superstar turned coach.

TSN:  Off the Record (video).    Who is the Jets number one goalie?  Gary Lawless joined Michael Landsberg to discuss this and more.

TSN 1040 Vancouver:  B-Mac and Taylor (audio).  Vancouver Giants head coach Claude Noel (feels odd writing that) was being interviewed and they asked him about what it was like to coach Evander Kane.  The question and coach Noel’s response starts at 5:45 mark of the interview.

TSN 1290 Winnipeg:  The Big Show (audio).   TSN Hockey analyst Jeff O’Neill joins the guys to discuss why Jacob Trouba may be just a year or two away from becoming one of the premier blueliners in the NHL.

Orange County Register:  Ducks need to hang on to beat Edmonton.  The Jets will have an opportunity to take advantage of a very good Anaheim team that may be a bit tired having played last night in Alberta.