Note:  The Jets return from a mini road trip in which they picked up three of a possible four points.  Fans were upset to see the team blow a two goal lead against the Avalanche last night.  The team faces another tough test tomorrow against the Ducks.

Winnipeg Free Press:  Sizzling power play not enough.  A bit of personnel change and the Jets are suddenly heating up on the special teams as they added a pair of pp goals last night.

Winnipeg Sun:  Jets let one slip away in 3rd period.  Losing that point is the kind of thing you reflect on at the end of the season.  Jets will have to examine where they let it get away from them and ensure that doesn’t happen again.

Winnipeg Sun:  GM Kevin Cheveldayoff may need to make trade when all defencemen are healthy.  One thing about Paul is he never pulls any punches in his columns.  In this one he looks at the potentially surplus D this team could have and dangle as trade bait. 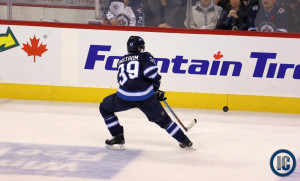 Denver Post:  Gabriel Landeskog’s fight vs. Andrew Ladd a game-changer for Avalanche.  The folks at Hockeyfights gave declared the Avs captain as the winner and it sounds like Coach Roy and his team are using this fight as inspiration for the win and seeing it as a potential turning point in their season.

Sportsnet:  Two captains toss some haymakers (video).  That tilt caught me by surprise.  Neither are particularly known for fighting (Landeskog now has just four NHL fights and that was Ladd’s 15th) but the two looked like a couple of pugilists last night.

Hockey’s Future:  Hellebuyck, Kichton contributing to resurgent IceCaps.  Important for this organization to continue to have depth with their AHL squad as they build towards eventually having a much deeper NHL team.

NHL.com:  Jets buying into Maurice’s defensive system.  Missed this article from senior NHL.com writer Dan Rosen on the Jets and how the team is buying what coach Maurice is selling.

TSN 1290 Winnipeg:  Hustler & Lawless (audio).  Darren Dreger discussed why the Jets organization is happy with the team they have, despite some holes in the lineup.

TSN 1290 Winnipeg:  The Big Show (audio).  Dennis Beyak discussed where Dustin Byfuglien and Ben Chiarot fit in when everyone’s healthy, and how the new system the Jets are employing is leading to success.

Illegal Curve:  Coach Maurice post-game (audio).  How did he see that one play out?  Did he think his team sat back on the lead?  What did he like from Scheifele’s game tonight?  Taking three out of four points on the road.  On how the power play is clicking.

Almost two years since trade to Jets, PLD is 'getting to where I want to be'.