Note:  The Jets are leaving Winnipeg with five out of six points as they head out for two games in Dallas (Tuesday) and Colorado (Thursday).  They will be practicing at the MTS Centre today at 11 am before boarding a plane for Texas.  As always ensure you follow us on Twitter @illegalcurve for the latest Jets news.

Note II:  The NHL Department of Player Safety announced that Evander Kane will have a hearing today for his hit on Clayton Stoner.

TSN:  C’mon Ref.  Couple of fans asked former NHL referee Kerry Fraser his opinion on why there weren’t more penalties given out in the melee that occurred after the Kane hit on Stoner.

Winnipeg Free Press:  Jets first to blink in staredown.  It was the first time in nine games that the Jets didn’t score the first goal.  However they battled against a very good Ducks team and salvaged the one point. 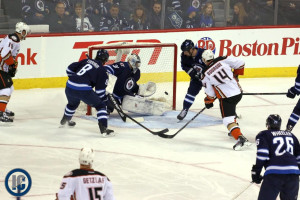 Winnipeg Free Press:  Another solid outing on blue-line for Buff.  Certainly not an easy transition to defence, especially when you are being relied upon to play big minutes with the top guys on the sidelines.

Winnipeg Sun:  Palmieri’s top-shelf snipe leads Ducks past Jets.   Sunday afternoon hockey has not been known for riveting games but yesterday’s contest certainly was engaging.  Ken breaks down the Jets loss in his column. 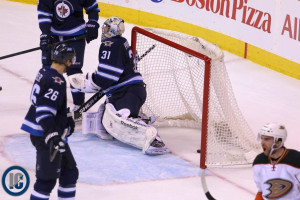 Winnipeg Sun:  Perreault faces old friends.  You could see some friendly slashes during the whistles with some of his former team mates but you could also see that he was determined to try and win the game.

CBC:  Jets lose Kane in game of inches against Ducks.  Jeff breaks down the game plus his slap shots which included Byfuglien extended his goal streak to four games and Kane’s game misconduct.

Sportsnet:  Kane hits Stoner, recieves boarding major (video).  Upon watching that replay you wonder what Kane was thinking but at the same time I’m still not sure how Stoner walked away with only two minutes.

TSN: Hockey’s Top 10 Storylines of the Week.  The Jets defensive woes is listed as one of the big stories for the week.

Pressbox Podcast:  Host Drew Mindell and analyst Michael Remis break down the Jets play against the Ducks this afternoon.