Winnipeg Free Press:  Jets spirit away point in Jersey.  With the Jets down 2-0 going into the 3rd period against a team like the Devils I didn’t give the comeback much of a chance.  Jim Slater put it best:

“A lot of teams, when they’re down 2-0 going into the third against the New Jersey Devils, don’t have much success.  We showed a lot of poise out there to get that big point that we needed. It’s unfortunate we ended losing in overtime, but it was a good, solid team effort to get that point for us.”

Winnipeg Free Press:  Flood going with the flow.  I thought Flood played a pretty solid game and considering he had to cover for Big Buff’s wanderings, he played pretty, pretty, pretty well.

Winnipeg Sun:  Jets have Flood assistance.  Pretty cool to have scored your first goal against a future Hall of Fame goalie in Martin Brodeur. 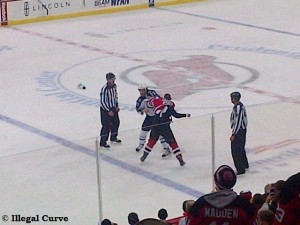 The Telegram:  IceCaps keep finding new heroes, keep winning.  Just as players are getting a chance to impress with the big club, down on the farm guys who weren’t appearing in the lineup are now being given an opportunity to perform.

New York Post:  Rangers’ McDonagh has gone from throw-in to standout.  I’m sure Habs fans don’t want to hear anymore about the Gomez trade but here is another reminder of what they could of had.

New York Post:  Rangers beat Canadiens 5-3 for third straight win.  When we spoke with Rangers beat writer Andrew Gross on the IC Radio show yesterday he suggested that this team has the right tools to start climbing up the standings and it appears that Torts has them playing the right brand of hockey.

Sportingnews:  Power play still powerless, but Richards doing his part.  When the team is winning, an ineffective power play is something to be worked on, but is clearly not critical for success right now.