Note:  Tune into today’s Illegal Curve Radio Show as the B line (Remis, Minuk and Leibl) take over the studio from 12pm-3pm cst on TSN Radio 1290.

The Hockey News:  Before I made it – Johnny Oduya.  Interesting story about his progression in hockey.

New York Times:  Jets’ team records go all the way back to Atlanta.  Winnipeg fans still want to talk Selanne breaking Bossy’d record and Hawechuk winning the Calder but truth is the records to compare against belong to the Thrashers.

Winnipeg Jets: Jets recall Postma from IceCaps. He looked good with the Jets in preseason, we’re looking forward to what he can bring to the depleted d corps.

Winnipeg Free Press:  Ready to snap in the Big Apple.  Ed Tait offers up his thoughts, New York Style, on the things he likes and dislikes about the Jets so far this season.

Winnipeg Sun:  Jets back Shanahan.  Even if you disagree with a ruling made by the NHL’s czar of enforcement, he is willing to explain it in a transparent fashion.  I personally like where he is trying to take the game.

Winnipeg Sun:  Jets have taken right path.  These are clearly not the same Jets who left Winnipeg well below .500.  It appears that the team has gelled during their longest road trip of the season.

Globe and Mail:  Ondrej Pavelec helps Winnipeg Jets avoid turbulence.  If you are good you might also be lucky and sometimes being lucky makes you look good, or something like that.  Pavelec has played stellar but there must have been a half dozen lucky bounces that could have gone against the Jets in the Islanders game. 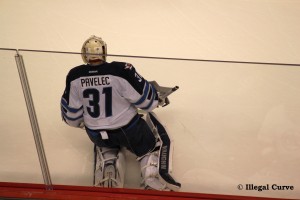 Winnipeg Free Press:  IceCaps take sole possession of first place.  It isn’t just the Jets who have had to make roster adjustments as Paul Postma was the latest Cap to get the call up from the parent club, yet they continue to win.

Northjersey.com:  Brodeur’s goal – play better.  Jets fans are hoping that he doesn’t recover his ‘old form’ against the Jets who are currently riding their first winning streak of the season.

New York Post:  One wander hosts another.  Lots of former Thrashers on this time although many aren’t expected to play against their former team.

Star-Ledger:  Devils’ Ilya Kovalchuk is day to day with lower-body injury.  You never like to see a player injured, but when it is the opposing team’s sniper….