Note: Following last night’s 6-2 bombing of the Avalanche the Jets have to switch focus to face an Anaheim Ducks team who won an ugly 5-4 game in St. Paul against the Minnesota Wild on Friday.  Leading scorer Corey Perry left the game with a lower-body injury just ten minutes into the game and did not return.  He will accompany the Ducks to Winnipeg and we should have a better idea of his status soon.  For the latest Jets news ensure you follow us on Twitter @illegalcurve.

Winnipeg Free Press:  Defence holds strong.  No Enstrom, no Bogosian, no Clitssome, no problem.  While the loss of top D men is never usually easy to replace Dustin Byfuglien sure made that transition quite smoothly last night.  Ben Chiarot picked up his first NHL point in just his third NHL game.  Of course the Jets were playing a tired and injured Avs team.  Big team tomorrow against Anaheim.

Winnipeg Free Press:  Little’s hat trick makes history.  Unlike in the past there wasn’t a lot of two goal drama with the crowd wondering when/if he would score a third.  Just 32 seconds after scoring his second the Jets centre made history. 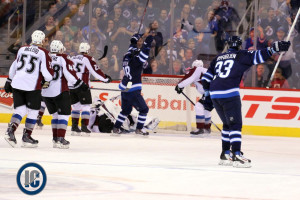 Winnipeg Sun:  Jets bury Avalanche on Little hat trick.  I can only imagine that Eric Boulton’s phone was blowing up from his former teammates finally being able to say that he no longer holds the record.

Winnipeg Sun:  Thorburn helps Jets reap rewards.  Just as happy as players were post-game to talk about Bryan Little’s three goals you could tell that the Jets players were just as happy to see Thorburn get a goal in the winning effort.  Ironically Thorburn had an impact on a night when Bolton’s record, one he helped create, was broken.

Illegal Curve:  Bryan Little scores the first hat trick for the Winnipeg Jets franchise.  As always we give you the sights and sounds and quotes from last night’s historic three goal performance from the Jets centre.

TSN 1290 Winnipeg:  The Big Show (audio).  Paul explains how the new defensive system under head coach Paul Maurice can make Byfuglien a better defenceman than he’s been in the past.