Bryan Little put away three goals against the Avs.

It has been a long time coming for this re-born franchise.  There have been many two goal games since the Jets returned in 2011-12 but not one game where a player has popped a hat trick.  The last one for this franchise dates back to December 18th, 2010 when the Atlanta Thrashers Eric Boulton scored it with his ‘Greek God’ line (which included Chris Thorburn and Jim Slater).

Tonight Little appeared to have scored his first goal 12:29 into the 1st period.  I say appeared because Avs goalie Semyon Varlamov made what looked like a fantastic save to keep the game tied 1-1.  However, once we saw the replay in the Pressbox it was clear that the puck was indeed over the line. 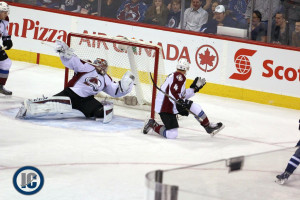 His second goal of the night came just 45 seconds in the 2nd period.  With the crowd still on their feet, the line of Wheeler, Ladd and Little pushed back into the Avalanche zone and 32 seconds after his second goal Little finished off the hat trick on a goal that was so quick many (including Little) didn’t even realize it had gone into the net. 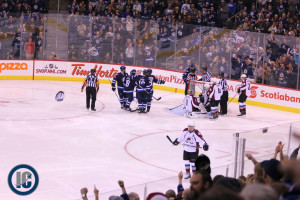 Once fans realized that they were experiencing the first hat trick in the Jets 2.0 history they immediately started to cheer the home squad.  Then came the hats.  Slowly at first and soon Winnipeggers were parting with their headwear and tossing it onto the MTS Centre ice.

It was quite evident that these fans appreciated that they were part of history for this franchise.  Even once play resumed fans were still chanting “Little Little Little”.

It was a big win for the home squad and even bigger that #18 got three goals and set the record for Winnipeg.  His teammates were very happy to see that he gets rewarded.

Following the game players were asked about Little getting the hat trick.  Chris Thorburn who was part of the aforementioned Greek God line grinned and said “there’s been a guy that’s held that record for a long time and it’s nice to see that Lits gets it and gets rid of the other guy’s name (he’s a good friend of mine)”.

Even Blake Wheeler wasn’t sure the third goal had gone in initially “I thought it hit off the crossbar so I was trying to put it in myself”.  But once he realized that Little had gotten the third goal you could see that he was happy for his centre “when he’s feeling good with the puck and he gets hot he’s about as dangerous as anyone I ever played with…..and to get rewarded, that’s awesome”.

Quite a memorable Friday night in December for the Jets fans inside the MTS Centre and for those watching on tv.