Note:  The Jets flew to Ohio yesterday to start this three game road trip starting with a date in Columbus with the Blue Jackets tonight at Nationwide Arena at 6 pm cst.   Be sure to stick with our comprehensive coverage throughout the day and following the game.  As always ensure you follow @illegalcurve on twitter.

Winnipeg Free Press:  To err is human, to forgive is coaching.   No point in killing your team (in the media) for past mistakes.  All you can do is use them as teachable moments moving forward and hope they don’t repeat themselves.

Winnipeg Free Press:  Maurice has close eye on Jets lines heading into road games.  There may be some more changes afoot if things don’t improve but it doesn’t sound like coach Maurice has hated what he has seen from his lines. 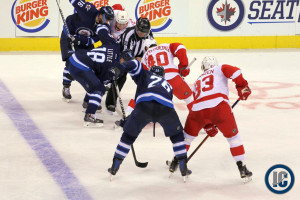 Winnipeg Sun:  Keeping it light and loose despite two-game losing streak.  There really does seem to have been an attitude adjustment with this squad as they are not allowing wins to get them overly excited and are reacting similarly to losses.

Winnipeg Sun:  Record would be much better with even a half-decent power play.  The running joke is the Jets are better off declining the power play than accepting it and continuing the futility.  Clearly putting the special back into special teams and adding a goal or two could have a significant impact on game results.

Winnipeg Sun:  Coach Maurice, Kane have fond memories of hockey great Pat Quinn.  The hockey world lost an important member yesterday and some members of the Jets recall him fondly.

NHL.com:  Fantasy All-Access – Hutchinson emerging for Jets.  This article is from a fantasy perspective but still talks about the impact that the Jets back-up is having this season.

TSN 1290 Winnipeg:  A traveler’s guide to planning a Jets fan roadie.  Paul Edmonds gives you his top five spots to travel to in the NHL.

TSN 1290 Winnipeg:  Rona Roundtable (audio).  TSN Hockey Analyst Shane Hnidy joins Rick to recap the Jets loss to the Blues, saying Winnipeg needs to tighten up their game as the team embarks on a three-game road trip versus Columbus, Buffalo and Boston.

Columbus Dispatch:  The Searchers.  Everything you may want to know about the Jets opposition today can be found in beat writer Aaron Portzline’s column.