Note:  After a disappointing home stand (1 win 2 losses) the team will head out on the road for three games.  They play a back-to-back on Tuesday (Columbus) and Wednesday (Buffalo) and then Friday in Boston (all are 6 pm starts).  Today they will practice at the MTS Centre at 11:oo am before boarding a plane for Ohio.  As always stay tuned to the latest Jets news via our twitter account @illegalcurve.

Winnipeg Free Press:  Penalty kill has lost it’s mojo.  The Jets weren’t particularly disciplined yesterday and specifically Evander Kane’s penalties.  Blues coach Ken Hitchcock admitted after the game that they basically used Kane’s four minute double minor at the end of 3rd to help his team rest/run down the clock.  While the Jets PK has been very good the Blues PP has been deadly and that team is just too talented to give them numerous opportunities.

Winnipeg Free Press:  Jets left singing the Blues.  It wasn’t the best way to end their three game home stand as this squad is now 4-5-1 on the season.  Read more from Tim on the game.

Winnipeg Sun:  Winnipegger Ryan Reaves scores winner to help Blues beat Jets.  He certainly delivered the knockout punch.  He followed up his goal with a little chat with the Jets Evander Kane.  Read Ken’s entire recap of the Jets loss. 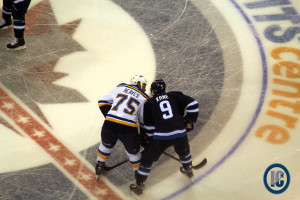 St. Louis Post-Dispatch:  Blues’ Reaves scores winner at ‘home’.  You could see from his celebration that it meant something to the Winnipeg native getting a big goal for his team in front of friends and family.  Be sure to read the entire recap from the Jets opposition.

TSN:  That’s Hockey 2Nite (video).  While they say the Jets have been playing much better defensively this year they pinpoint a couple of miscues that they made against the Blues, who made them pay for it.

Sportsnet:  Backes hit delivers Postma into the net (video).  The strength that Backes must have to toss Postma like a rag doll is unbelievable.

PennLive:  Connor Hellebuyck, IceCaps blank ]Bears.  Another shutout for Hellebuyck as he led St. John’s to a big win yesterday.  The team is on a hot streak with 5 wins and one OT loss in their past six games.

Post-game Podcast:  Host Drew Mindell and analyst Michael Remis break down the Jets play against the Blues this evening.