Note:  The Jets return to practice today as they get ready to face the St. Louis Blues tomorrow afternoon (3:30 pm start time) in the final of three games at the MTS Centre.

Note III:  I’m noticing a lot of people seem to be searching for the 50/50 results from the previous Jets games.  Here is a link to the page the Jets maintain which shows you the winning ticket numbers and whether the prize has been claimed.

Winnipeg Free Press:  Locker-room humming along at steady, positive pace.  No point in allowing negativity to set in.

Winnipeg Free Press:  DEFENCE’ defines Jets.  Plenty to digest in this piece from Tim as he looks at the Jets defence and whether that may be a predictor of success down the road. 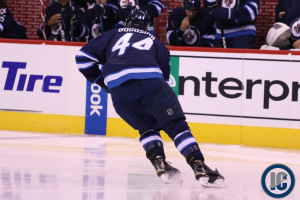 Winnipeg Free Press:  Weak 4th line will be costly for Jets.  Not difficult to figure out why your team is fatigued when you face a team like the Red Wings and you basically only roll three lines.  The article discusses what must be done and whether swinging a trade to improve this team to help get it in the playoffs will be worth it.

Winnipeg Sun:  The Case for Hutchinson.  What would Winnipeg be without a goalie controversy?  Paul opens up his column with that topic, then moves on to coach Maurice referencing fatigue with respect to the loss against Detroit (lack of use of 4th line), asks the question if Thursday was just a bad blip, how one player goes hot and another goes cold and finally on doing away with the fly-by.

TSN 1290 Winnipeg:  Rona Roundtable (audio).  J.P. Vigier joined the show to talk about how the Jets tough schedule finally caught up to Winnipeg.

TSN 1290 Winnipeg:  The Big Show (audio).  Shane Hnidy explains that despite the 4-3 loss to Detroit the cause for concern isn’t great due to the way the Jets have played in the first quarter of the season.

MGoBlue.com:  U-M Unable to rally after three-goal Penn State 1st.  Both Brennan Serville (2011, 3rd, 78th) and Andrew Copp (2013, 4th, 104) get mentioned.  Serville for a penalty against and Copp for an assist that brought his team within one as well as for a chance to tie the game.

Minneapolis Star-Tribune:  U-18 U.S. team beats Gophers in overtime.  Interesting that none of the players playing on the U-18 U.S. team are from Minnesota.  Minnesota native and Jets Jack Glover(2014, 3rd, 69th) did manage to score a goal in the loss for the Gophers.  Couple of quotes from Glover in the article.

Prince Albert Now:  Raider captain Morrissey spends time in community.  Good to see Morrissey (2013, 1st, 13th) is willing to give back to the community even when it’s something as simple as signing autographs.