Note:  The Jets are off today.

Note II:  The Illegal Curve Hockey Show will be on TSN 1290 Winnipeg on Saturday, from 12 Noon – 300 PM. Join Drew, Richard and Ezra, as they discuss and grade the Winnipeg Jets after the first quarter of the season, and preview Sunday’s Winnipeg Jets-St. Louis Blues game. Guests: Andy Strickland of Fox Sports Midwest, Aaron Portzline of the Columbus Dispatch, and in the “Saturday Spotlight” 10 time Stanley Cup winner, and Hockey Hall of Fame member, Yvan Cournoyer.

Note III:  We are over 2/3 of the way done Movember and Ezzy continues his quest to raise funds and awareness for this great cause on behalf of Illegal Curve.  Please donate to him here and help support this great cause.

Sportsnet:  30 Thoughts.  Jets are mentioned in thoughts 19 (Adam Lowry facing off), 20 (being less selfish as a team) and 21 (getting a deal done with Frolik).

Winnipeg Free Press:  Frolik is Mr. Shutdown.  He has really been a huge asset to this team.  Coach Maurice spoke yesterday how he started the season with a hand injury which impacted his play for the first six games of the year.  Clearly he is healthy now.

Winnipeg Free Press:  Ugly wasn’t enough.  Not in the face of the Red Wings who patiently waited like a cat with a mouse before they pounced on the Jets.  Ed breaks down last night’s affair looking at: 1)  Heart willing, legs weren’t 2) Two goals, two gaffes and a Hon candidate, two scary numbers and lastly, some rest for the wicked. 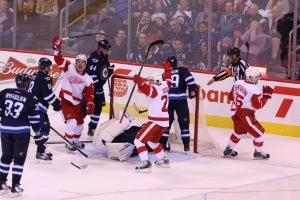 Winnipeg Free Press:  Postma fits role to the letter.  It has been a much better 2014/15 season for the defenceman from Alberta as he has been healthy and playing regularly has given him some confidence.

Winnipeg Sun:  Old, bad habits return as Winnipeg Jets blow leads, fall to Red Wings.  It wasn’t a very pretty defeat as the Jets gave up a late 3rd period goal.  Ken breaks down the loss in his column.

Detroit Free Press:  Red Wings finish with flurry to beat Jets.  Get a look at how the other side saw the game.

TSN:  That’s Hockey Tonight6 (video).  TH2N explains why Ondrej Pavelec shouldn’t take the blame for the Jets’ loss to the Red Wings since his defence didn’t give him much help.

Winnipeg Sun:  Teams find success when they learn to ‘bring it’ every single day.  He is one of the best in the business at what he does and has learned to be adaptable. 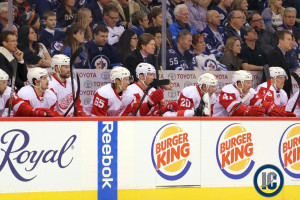 TSN: Penalty killing makes a difference for Jets.  Travis Yost looks at the numbers and discusses why the Jets efficient PK is having a big impact on the Jets place in the standings.

Illegal Curve:  Jets GM Kevin Cheveldayoff chats about his team (audio).  On the risks young hockey players face with their finances, is there anything the NHL clubs can do, is his team for real, on the performance of his goalies, on Blake Wheeler’s fighting and what it’s meant to this team, on Kane’s lack of scoring, on negotiating Kane’s contract, on Hextall’s antics, how badly would his team have to play for him to go down to the room to send a message.

Sportsnet:  Power Rankings.  Has the Jets moving from 17th to 14th although perhaps their numbers should be taken with a grain of salt as they have Hutchinson listed as a 21 year old.

Post-game Podcast:  Host Drew Mindell and analyst Richard Pollock break down the Jets play against the Red Wings this evening.