Note:  Following a highly successful road trip the Jets return to action at the MTS Centre to take on central division rival Nashville starting at 7 pm.  Be sure to stick with our comprehensive coverage throughout the day and following the game.  As always ensure you follow @illegalcurve on twitter.

Winnipeg Free Press:  Jets up, up, when away.  Always nice to see firsts that are of a positive nature following a road trip.

Winnipeg Free Press:  Maurice’s remake of Jets showing results, but players haven’t fully bought in yet.  Coach Maurice did say he wanted to start from the Jets net outwards so perhaps if the defensive side of things is clicking he may be ready to move on to getting the scoring started.

Winnipeg Sun:  Jets getting best goaltending they’ve had since return to Winnipeg.  Gotta love what a week or two can do to change the discussion.  Seven points out of eight on the road has now switched the focus of fans from the goalies to a concern over the lack of scoring. 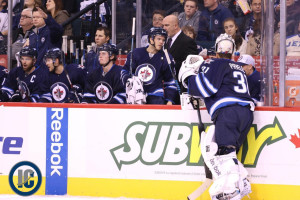 CBC:  5 things to watch for in Jets’ tilt against Nashville.  In advance of tonight’s game Jeff looks at five things including: 1) Riding high 2)  Good for him, great for Jets 3) Finding a solution 4) Hot hands and 5) Century club.

TSN 1290 Winnipeg:  Statistically speaking.  Scott Cullen writes about the play of Pavelec and how it has had early returns for the Jets.

The Hockey News:  Don’t be fooled by shutout heroics, these are the same Winnipeg Jets.  Right now the Jets have the least goals for in the Western Conference (22) only producing at a 1.75 goals per game clip (28th in the league).  While certainly not ideal the Jets seem to be playing within a system that may not be the most flashy and productive in terms of scoring, is getting the coach something he cares more about and that is points in the standings.

ESPN:  Wrapping up the Western Conference.  Don’t look now but the Jets were listed as trending up team.

The Tennessean:  Predators GM Poile ‘very happy’ with record.    Many pundits picked Nashville to be near the bottom of the Central division (with most suggesting a spot ahead of your Winnipeg Jets) they have gotten off to a red hot start currently sitting 1st in the division.  Of course it is still early in the season and they are just five points ahead of last place Colorado.