Note:  After a four game road trip the Jets are taking a day off.  They begin again with a home contest against their division rival  Nashville Predators on Tuesday night at the MTS Centre.

Winnipeg Free Press:  Jets shut down Blackhawks for 1-0 win.  While the lack of scoring has to be disconcerting for the Jets, they finished off an improbable road trip by adding another two points to the standings bank.  Don’t know how many people predicted this team finishing with 7 of 8 points during this four game road trip.

Winnipeg Free Press:  No. 2 tender has night to remember.  There was a lot of consternation with respect to the Jets backup after his first start this season didn’t go so well.  He quashed those fears (for now) with a performance to remember in the always tough United Center. 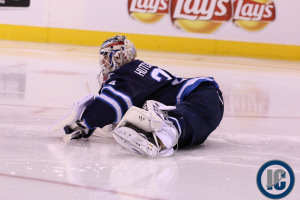 Winnipeg Sun:  Hard-working Jets grind down Hawks for second straight shutout.  While these games are not overly exciting, they are ones the Jets will have to play in order to compete with teams like Chicago, LA, Anaheim.

ESPN Chicago:  Offense eludes Blackhawks at home again.  Always interesting to read the perspective from the scribes on the other side of the press box.

Coach Maurice post-game.  Breaking down the win over Chicago.  The Jets shot blocking in front of Hutchinson.  Big start for Michael Hutchinson.  The penalty kill prowess.  Back-to-back shutouts.  What does this road trip do confidence wise for this team?