Note:  The last regular season home contest we saw was against the Bruins at the MTS Centre back on April 10th.   Today Jets fans finally get to support the home team as they take on the Nashville Predators in the home opener which starts at 7 pm.  Be sure to stick with our comprehensive coverage throughout the day and following the game.  As always ensure you follow @illegalcurve on twitter.

Winnipeg Free Press:  Enemy no more.  Newest Jets player Mathieu Perreault is discussed in this article including now being on the  side of the fans cheers.

Winnipeg Free Press:  You contest every puck’.  Discussing the coach’s game plan for being a good home team.

Winnipeg Free Press:  Jets ready to face ‘rock star’ ex-teammate.  Jokinen was always very good in his chats with the media the last few seasons and he was well liked by Jets players as well.

Winnipeg Free Press:  Jets hope to feel energized — not nerves — at home opener.  You can bet that the 15,004 fans inside the MTS Centre are going to be amped up and ready to go from before the puck drops.  Hopefully for the Jets they will be able to harness that energy for their benefit. 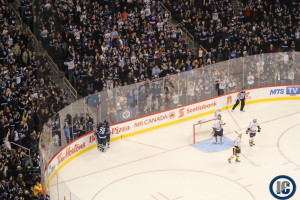 Winnipeg Sun:  Jets need to regain MTS Centre magic.  Ken writes about the Jets attempting to re-capture the mojo they had in the first season of the return when the MTS Centre was a place that saw a lot more wins (23) than losses (13).

TSN 1290 Winnipeg:  Jets counting on Scheifele, Trouba to take bigger roles.  Dennis writes about the two young guns and the role they will be playing on this team this season.  Jets fans will be watching both young players with great expectations all season long.  Coach Maurice did talk about the sophomore jinx during yesterday’s post practice scrum.

CBC:  5 things to watch for in Winnipeg Jets home opener vs. the Preds.  Jeff gives you his five things to watch this game including: 1) Home sweet home, 2) Powering up, 3) New look in Nashville, 4) Olli-smokes he’s back and 5) Top of the Pekka-ing order.

Sportsnet:  What Jets lack they make up in MTS Centre (video).  Sean Reynolds reports from Winnipeg where Jets players and coaches talk about the impact the fans have on the Jets.

Illegal Curve:  Coach Maurice post-practice scrum (audio).  On becoming a tough team to play on home ice.  How different does he expect the Predators to be this season?  How can he get the Jets to be a competitive team like Nashville?  Extra challenges because of the home opener?  Can the lower level teams be used as a measuring stick?  Has he seen any sophomore jinx on Scheifele and Trouba?

The Tennessean:  Predators open road schedule with back-to-back test.  You could excuse the Preds if they were looking ahead to the game against the Hawks on Saturday night and that is exactly what the Jets have to hope happens.

The Tennessean:  Predators’ practices motivated ahead of Jets’ home opener.  Looks like Nashville was mixing up the lines as they prepared for tonight’s contest against Winnipeg.

Illegal Curve:  Re-assignment news.  The IceCaps sent down goalie Jussi Olkinuora to the Ontario Reign of the ECHL.  Means they will be going with the duo of Peter Budaj and Connor Hellebuyck as the goalies in St. John’s.