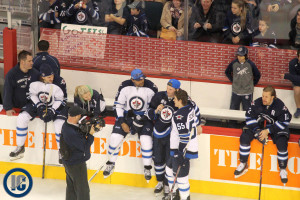 Today in his post-practice scrum coach Maurice was asked about the sophomore jinx and how it could impact players like Jacob Trouba and Mark Scheifele.

“The sophomore jinx is not on the player.  It is on the expectation of what happens to a man over four months or five months in the summer.  They are five months older.  They are not five year vets.  So, my expectations are I’m hoping for both those guys to be a bit better than they were last year and that would be a good curve to be in.  We won’t do it statistically, whether Scheifs scores 12 it won’t be looked at as a down year its about development, getting them on the ice playing them in harder roles probably first, giving them tougher assignments, but I didn’t look at those two guys on the board and expect them to go from five months older to being a lot better than the rest of the guys in the league.

Of course he followed the above comment by adding this:

“That being said in our structure, in our team we’ve got them in really important positions.  Positions that sometimes players take years to get to so they are going to have times where they look like they’ve really come on and we will be excited about that and there are going to be some times when both those guys struggle a bit with the role as we’ve asked them to do big jobs”.

What are your expectations for Mark Scheifele and Jacob Trouba this season?