Note:  Day two of three straight days of practice takes place today the IcePlex at 11 AM.

Winnipeg Free Press:  Home is where the HARD is.  The fans prove they are into it on a nightly basis with inventive chants/loud cheering and it is time the home team starts to harness that energy.

Winnipeg Free Press:  Jets practice drills aimed at cranking up their ‘battle level’.  Certainly doesn’t sound like the Jets bench boss is letting up on his troops.

Winnipeg Sun:  Blake the Basher.  I suspect not many prognosticators predicted that the Jets winger would be leading the NHL in penalty minutes.  While standing up for his teammate is commendable I suspect coach Maurice would prefer to see him putting the puck in the net. 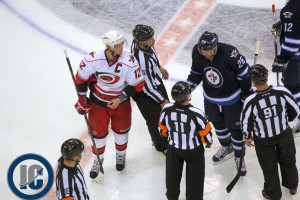 Winnipeg Sun:  Home ice is key.  The Jets would like to recapture the magic of the MTS Centre that they had during the first season.  Can that happen?  We will find out on Friday.

CBC:  Jets hoping to feast on Predators at home opener Friday.  Coach Maurice talks about the ‘good feeling’ and the team can start getting a lot of ‘good feelings’ if they pounce on the Predators.

Illegal Curve:  Coach Maurice updates the media on Kane’s status.  While many were hoping the young sniper would be back on the ice soon, it would appear from yesterday’s scrum that Kane won’t even be re-evaluated until the 23rd.

Metro News:  What we know about the Winnipeg Jets: They kill penalties, but need a goalie.  Plenty of improvement to go around on this team early in the season.

Illegal Curve:  Coach Maurice scrum (audio).  On three days of practice ahead.  How would he summarize the three game start?  On Blake Wheeler’s pugilism.  Status of Evander Kane.  This early in the season how much does that injury hurt the club?  On Kane’s status during these two weeks.  Five in a row at home, how can they capitalize on home ice advantage?   On teams like San Jose/LA and the kinds of games they play.  Can he ask his team to step up their game to play a San Jose or LA?

TSN 1290 Winnipeg:  The Big Show (audio).  With a five game homestand looming for the Winnipeg Jets, Dennis Beyak explains why the team needs a great stretch to stay in the hunt in the Central Division.