Coach provides an update on the status of Evander Kane. 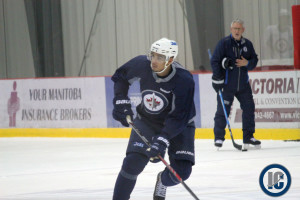 While Jets fans await further word on the sniper coach Maurice addressed it a bit today following practice.  He was asked if he had an update and said:

“…it would be a two week kind of resting period and then he will get re-evaluated.  After that it will be week to week.  Other than the fact I had thought originally it was gonna be month to month to be honest with you, we took it as good news.  But we won’t have anyone look at him again until those two weeks are up and then we will have a better idea of how long we think it will be before he is back”.

It would appear that means he will be re-evaluated on the 23rd (two weeks after the Coyotes season opening game) and then the team will have a better idea of his status.  The coach was asked what Evander will be doing during these two weeks:

“..they will start range of motion and all those other things but he won’t skate in that two week period.”

You can hear the entire coach Maurice scrum from today here.