Note:  Following a day off yesterday, day 8 of the Jets training camp kicks off with both groups back at the MTS Centre.  Team White hits the ice at 9 am and Team Blue noon.  Here are the players that make up each group.  Both practices are closed to the public.  Be sure to stick to @illegalcurve for all the latest news.

Note II:  Tomorrow is one of our premier shows as Illegal Curve Hockey brings you our NHL Season Preview on TSN 1290 Winnipeg.  We go division by division, team by team as the guys preview the 2014-15 season.  Guests:  Eric Duhatschek (Globe and Mail) and Kevin Allen (USA Today).

Winnipeg Free Press:  Chemistry experiment.  There has been plenty of mixing and matching and all involved are hoping that this is the final experiment.

Winnipeg Sun:  Jets new top line of Scheifele, Kane and Wheeler has great potential.  Interesting comment by the scout about the potential for this line.

Winnipeg Sun:  Maurice liked what he saw from Michael Hutchinson, despite ‘Tough game’.  If there is one thing we have learned it is that nobody is being judged solely based on what they did or didn’t do in one game. 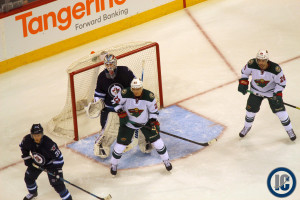 Winnipeg Sun:  Jets goalie hopeful Danny Taylor an international man of mystery.  Not an easy place to be for a goalie fighting for his opportunity but it sounds like Taylor has the right attitude as he bids his time waiting for his chance to impress the team brass.

TSN 1290 Winnipeg:  Rona Roundtable (audio).  Shane Hnidy recaps the Winnipeg Jets exhibition loss to the Edmonton Oilers and gives his thoughts on which Jets prospects are poised to make the Winnipeg Jets on opening day.