Note:  Day 7 of the Jets training camp is today however both Team Blue and Team White are off for the day.

Winnipeg Free Press:  Big centres the future.  I’ve been really impressed by Lowry’s development.  Last season in the AHL really helped his game and his ability off the ice to understand his strengths/weaknesses and discussing it with the media shows a maturity beyond his 21 years.  Gary discusses how Lowry, Scheifele and Little will give the Jets some nice centre depth for years to come.

Winnipeg Free Press:  Lots of skill… and fixing to do.  Ed breaks down the 3-2 loss to the Oilers including touching on topics such as the reuniting of Kane/Scheifele/Wheeler, production of the veterans was noteworthy and the last line of defence. 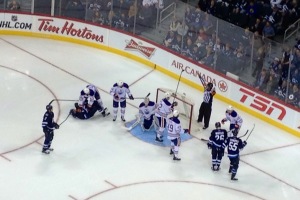 Winnipeg Free Press:  Galiardi makes favourable impression.  He made an interesting comment post-game about how coming into camp he is a lot hungrier because of the fact that he doesn’t have a guaranteed spot.  That should prove useful to the Jets.

Edmonton Sun:  Oilers goalie Laurent Brossoit thrilled to get two chances to face Jets sniper Evander Kane.  It isn’t everyday that a young tender faces a player with a wrist shot like Kane.  The young goalie, who is also a product of British Columbia like Kane, put in a solid effort for his team.

Winnipeg Sun:  Coach Maurice wants people to take it slowly with young prospects.  As he correctly pointed out there is nothing wrong with taking time with young players.  The problems generally occur when you rush the young prospects simply to get them into the NHL.

The Score:  Jets, Flyers had serious trade talks regarding Evander Kane: McKenzie.  Somewhat of an old story that got dragged back into the spotlight on Wednesday.  Really nothing new here.

Sportsnet:  Kane dances around question about future with Jets.  Spector dismisses the idea that the problem with Evander is based on the colour of his skin but more about the idea that a brash, young guy rubs the sensibilities of the city wrong.  Despite hoping that we could just talk about his on ice play the story will still occasionally get brought up again by visiting journalists.


ESPN:  Facing an uphill battle. Missed this preview of the Jets by Scott Burnside the other day.  As the title suggest he doesn’t expect the Jets to be major contenders this season.