Note:  Day 5 of the Jets training camp goes today following last night’s 2-1 win over the visiting Minnesota Wild.  Camp moved to the MTS Centre on Monday, remains there for the remainder of the pre-season and is closed to the public.  The Jets have changed up the training groups and the scheduled times are now Team Blue hits the ice at 9 am and Team White will be there at noon.

Sportsnet:  30 Thoughts.  I actually started to write the source as CBC.  Anyways, Friedman put out his 30 thoughts today and thought 3 is about the Jets Nikolaj Ehlers.

Winnipeg Free Press:  Good start for youngsters.  As Richard pointed out on the post-game podcast, it is important to note that the Wild didn’t ice a complete NHL roster so it is a tad premature to get too excited by last night’s effort.

Winnipeg Free Press:  Ehlers not so hot, Lowry shows a lot.  Gary breaks down the play of the four rookies (Ehlers, Lowry, Petan and Morrissey) that everyone is watching.

Winnipeg Free Press:  Jets’ win much more Dali than Picasso.   Ed talks about the young guns, gives you three random thoughts and takes a look at the man in the petri dish. 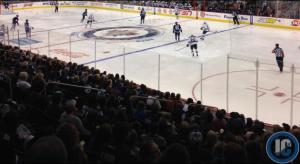 Winnipeg Sun:  Young Jets show their worth.  While it is premature to get overly excited by what you saw last night the Jets have a nice crop of youngsters they are getting ready to harvest.

CBC:  MTS Centre gets new beer, bathrooms and lounges.  The word of the day yesterday was “flow” as fans in the 300 section have to be excited by all the new urinals that have been installed in the building.

CBC:  Season Preview – Jets.  The Jets were up for a  season preview that the CBC is doing of all seven Canadian NHL teams.

Post-game podcast from the Press box: Host Drew Mindell and analyst Richard Pollock breaks down the Jets play against the Wild.