Winnipeg Free Press:  Can he make the jump?  Kichton put in a marathon season in the AHL last year and it remains to be seen if he can make the jump in 2014-15 or if he will require a bit more AHL seasoning.

Winnipeg Free Press:  Wheeler says Kane unfairly picked on once again over lighthearted tweet.  Not really sure who was picking on Evander Kane for his now deleted tweet.  I didn’t have a problem with it.  I didn’t even really notice the media in this city pick it up and react with any significant umbrage (there were no local stories  on the tweet yesterday until after it was discussed at the skate).  Regardless, I think its a good lesson in why you can’t take social media too seriously.  As a fan you have to decide what you would prefer.  An athlete that is a robot who says the same old generic crap or one who actually shares his thoughts.  In this case neither Wheeler’s comment nor Kane’s tweet merited any special attention. 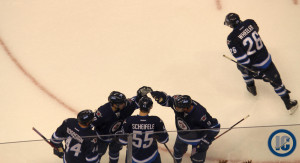 Winnipeg Sun:  Wheeler is a leader and wants Kane to join him. The fact of the matter is this team could stand to have a room full of leaders and based on the level of competition they are set to face this season, all will be forced to step up big this year.

TSN 1290 Winnipeg:  Hustler and Lawless (audio).  Senior NHL writer for ESPN Craig Custance joined the guys to chat about the Wheeler interview that caused all the hullabaloo.

Jets official site:  On the Radar (video).  Mitch caught up with goalie Connor Hellebuyck in this feature focusing on prospects that were here during rookie camp.