Two weeks after being named First Star, Jets top centre Mark Scheifele gets the nod as Second Star of the Week in the NHL. 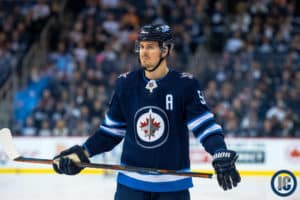 Two weeks after he was named First Star of the Week (for the first time in his career) Jets top centre Mark Scheifele got the nod as the Second Star of the Week after he put up five goals and six assists in four games including two OT game winners.  In that stretch the Jets went a perfect 4-0.

This is the third time Scheifele has been recognized as a Star of the Week. In addition to the previously mentioned First Star he was the league’s Second Star back on October 29th.

In 33 games this season, Scheifele has 21 goals and 25 assists for 46 points, good for 5th overall in the NHL.